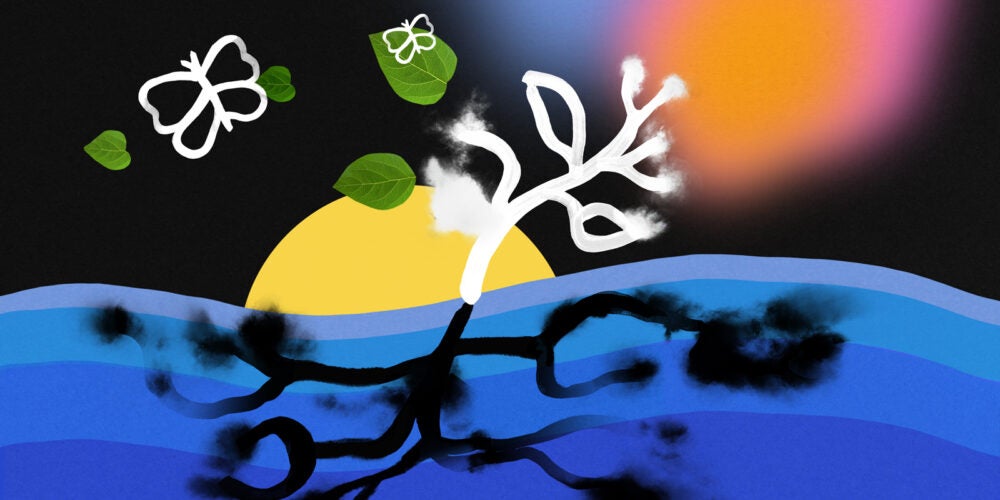 Every child in Kenya learns in school that Nairobi is prone to flooding because it’s an “accidental” city, situated on what had been an uninhabited swamp near the Rift Valley escarpments. What as a child was a truism now fills me with dread in the spring and in the fall, during what we call the “long rains” and the “short rains.” These rainy seasons have become more intense, to the point where what was nightmare traffic after rainstorms has now devolved to some Nairobians’ evening commute becoming a night spent in the car.

Bad traffic afflicts city dwellers everywhere, of course, but during the rains here in Nairobi it represents the anxious reality of living in a world that seems ever more unpredictable. Climate stress isn’t felt just in the way it is already affecting weather patterns and conjuring natural disasters; it is also in the profound psychological stress of thinking of it all.

Just a few years ago, Nairobians chuckled at a question on Kenya’s census about whether your household owned a boat—the city is roughly 200 miles from Lake Victoria, the nearest large body of water, and about 300 miles from the Indian Ocean. Now, with flooded streets becoming more common, the question doesn’t seem so absurd. That’s the thing about the climate emergency we are living in: The absurd has taken a turn into something more practical, even prosaic. In Kenya, where the country’s health ministry estimates that 75 percent of people in need of medical services for mental health challenges cannot get them, every prolonged drought and angry downpour is a hazard that can not only destroy livelihoods but also set off a spiral of depression and anxiety. We have to take whatever refuge we can find.

The research scientist Kritee started using Buddhist rituals to cope with her climate grief. Now she’s helping others do the same.

About 10 years ago, a friend of mine decided to establish a butterfly garden in his rural home in eastern Uganda, not far from Kenya’s western border. I wondered why he didn’t want to grow coffee or tea or even sukuma wiki (collard greens) as my neighbors in Nairobi do with their backyards. Yards here are for doing something “useful.” So, I would listen with amazement, and a little incredulity, as my friend described his elaborate plan for the garden’s flowers and fruit trees and the birds and butterflies that he was sure would return to the area; I knew he was an earnest person but also attracted to what he called “crazy ideas.”

As our weather becomes more unpredictable, it doesn’t seem like a crazy idea anymore. His first step in establishing his garden was constructing a small dam to secure a permanent source of water. As the rains have become both more intense and less reliable, the local community has been able to turn to that little dam for its daily water needs.

In Nairobi, trees are cut down to widen highways, exacerbating flooding by removing the vegetation that used to sponge up the rain. My friend’s area is rural, but his butterfly garden is reclaiming space and regenerating land that had been overworked and lost its fertility. He tells me the community around his garden is engaging with the issues of ecosystem restoration in a much deeper and profound way, sometimes even taking him to task if he puts in plants that are not indigenous. It’s part of a bigger trend in this part of the world of recovering lost or long-forgotten plants, ingredients, cooking, and storing methods. Sometimes this is driven by necessity—some of our areas are so heavily deforested, people have returned to slow cooking in an underground earth oven, which saves fuelwood.

A fellowship to help fight fatigue – and climate change

The Climate Health Organizing Fellowship is training a dozen teams on activating their communities to improve patient well-being.

For me, even the idea of this garden is a psychological refuge. As living in Nairobi has become more and more stressful, with the frequent flooding, nightmare traffic, and now higher temperatures (and more aggressive mosquitoes), I have found myself asking him to tell me how the garden was getting on. How big were the trees now? What flowers were blooming; which insects had recently been spotted? Perhaps I am distracting myself from the climate disaster that is unfolding all around me; Chinua Achebe once wrote that even when you are carrying an elephant carcass on your head, you still might find yourself searching with your toes for a grasshopper. Being in green spaces has been linked with lower levels of anxiety, depression, and stress, and I’ve found that even talking about this garden builds hope. I live in a city where things seem dire, in a country with little to no mental health support, on a continent that is casually described as a future source of “climate refugees.” My friend’s garden says to me that we may not be able to do much to fix the climate emergency, but at least we can build something beautiful in the meantime. My friend is creating high ground above ever-rising despair, and I can’t wait to set foot on it.

Christine Mungai is a writer, journalist, and curator of Baraza Media Lab in Nairobi.