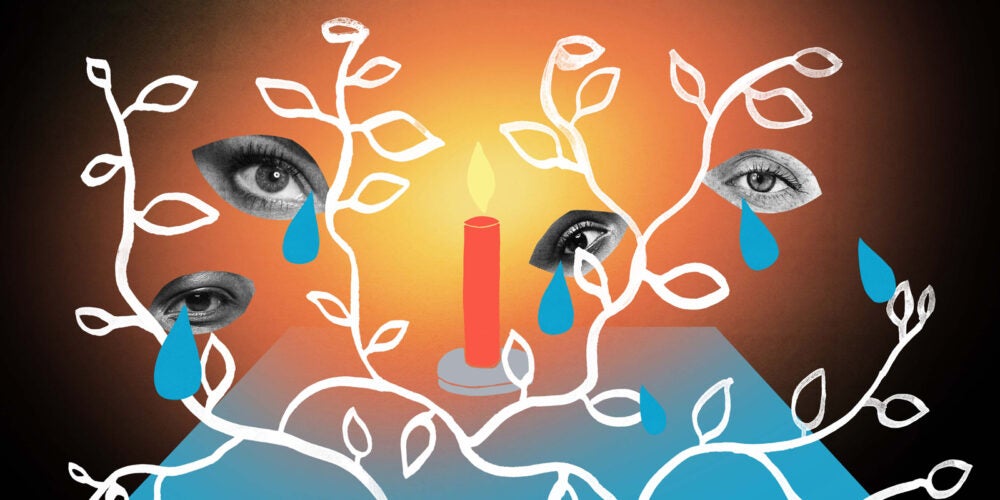 Extreme weather and alarming scientific reports are prompting more people to experience climate grief—feelings of loss, depression, or anxiety about climate change. These feelings are familiar to Kritee (she goes by one name), a senior scientist at the Environmental Defense Fund who holds a PhD in biochemistry and microbiology and spends her days helping farmers in India adapt to the warming planet.

When she experiences climate grief, Kritee, 42, draws on her spirituality for strength. A Zen priest since 2009 and co-founder of the Rocky Mountain Ecodharma Retreat Center, she teaches meditation and holds community grief rituals in Boulder, Colorado. She has also led grief workshops for faith-based members of Al Gore’s Climate Reality Project and a regional office of 350.org. She suggests such workshops can help fill gaps in our overtaxed mental health infrastructure.

Here is her story, as told to writer Melissa Bailey. Kritee’s words have been edited for concision and clarity.

I was born and brought up in India. When I came to the U.S. in 2001 [to start a PhD at Rutgers University], I was very depressed. I felt isolated and I couldn’t believe there was so much abundance for the middle class in America when so many were suffering worldwide.

A friend introduced me to a local meditation group. As soon as I started meditating, somehow I found a lot of grounding. Nothing outside of me had changed—I hadn’t found a direction in life or started feeling less sad or angry about environmental issues—but I felt a deep laughter rising from within me, and basically, I was hooked.

For the longest time, I did not bring what I felt about environmental issues into my meditation. I felt that whatever I was learning as an environmental scientist was an intellectual exercise. What I was dealing with on my meditation cushion was primarily the maladjustments from childhood, from having grown up without a father around me and things like that.

But when I went to a workshop with Joanna Macy, a Buddhist eco-philosopher and systems thinker, her way of being and her framework gave me permission to bring my emotions around climate crisis and ecological devastation into my contemplative world.

She describes ecological grief on multiple levels. She says if we are one with everything, which is what Buddhism claims, you are the river. You are the land that has gotten polluted and has seen dumping of radioactive waste. She goes down on the floor and she writhes and sighs and flows and cries the cries of a river.

I just was sobbing uncontrollably in that moment. I could feel the river flowing through me and sobbing. She transmitted that climate grief to us.

I started leading grief rituals in 2015. I’ve held grief circles for all groups of people, sometimes only for people of color or women. I do not just talk about climate grief. I see climate grief as just another layer to other kinds of trauma that we human beings experience.

I’ve had people say they’ve done years of therapy and nothing happened, and this one grief circle changed their life. There is something about community witnessing you in your grief that cannot happen if just one person witnesses you. There’s a powerful sense of solidarity. Once you’ve shared your deepest grief, and others have spoken similar truths, there’s the sense that I’ll do anything for you. That kind of friendship is breathtaking.

Melissa Bailey is a freelance journalist and a Ted Scripps Fellow in Environmental Journalism at The University of Colorado Boulder.