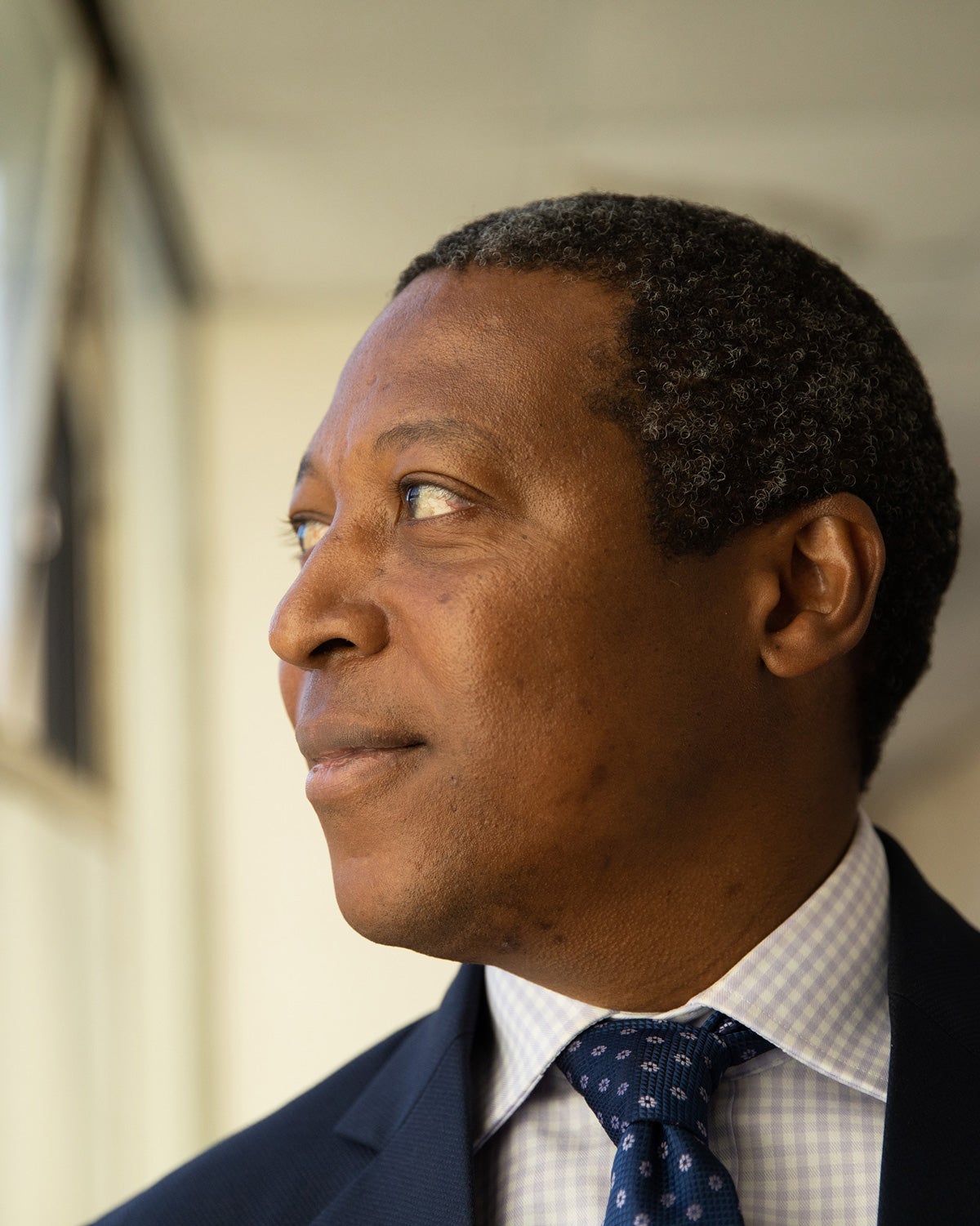 Ntobeko Ntusi still remembers starting medical school at the University of Cape Town in 1999. It was several years after the removal of apartheid laws dictating where Black people like him could live, study, and work, but he couldn’t see much progress in the vaunted halls of the medical school. “There were incredibly few Black teachers and consultants,” he says. He and other Black students struggled to feel they belonged, despite living in a country where they represented the majority demographic. “The culture, the norms, the traditions, and even the values felt foreign to many of us,” he says. It didn’t help that the walls were covered by photographs and paintings of notable figures from the medical school’s history—most of them white and male.

More than 20 years on, Black medical students now make up the majority, and there’s a growing complement of Black academic and clinical staff to teach them, including Ntusi. His photograph is on the notables wall now—he’s the head of UCT’s Department of Medicine. Today’s medical students are from South Africa’s “born free” generation; they never lived under the yoke of apartheid. Still, echoes of South Africa’s institutional racism remain, in the names of lecture theaters, in the fact most patients who end up at public hospitals are Black and poor, even in the way student doctors interact with patients. During rounds some students will still instinctively use the apartheid racial categories (white, Black, Indian, and Coloured, which refers to people of mixed descent) when presenting patients, Ntusi says, even though it is of no medical consequence. “I always ask why it is important to mention ethnicity, and they never have a response.” Black medical students still say they feel isolated and experience racism from fellow students and faculty, at UCT and other medical schools in South Africa. They say medical school faculty still show racial bias when evaluating Black students.

Silencing these echoes of apartheid in his medical school and across South African health care is a priority for Ntusi—one he shares with many of the country’s emerging Black health care professionals.

Politically, apartheid died in 1994, after 46 years of entrenched racism that succeeded centuries of exploitative colonial rule. No longer do Black South Africans, who make up more than three-fourths of the country’s 60 million people, have all aspects of their lives regulated by the ruling government. Yet apartheid-era patterns in housing, socioeconomics, and health care infrastructure are fundamentally unchanged, says Jabulani Ncayiyana, an epidemiologist and lecturer in public health at the University of KwaZulu-Natal in Durban on South Africa’s East Coast.

Access to health care remains strongly racialized: In 2018, 73 percent of white South Africans had access to private health care through health insurance compared to just 10 percent of Black South Africans. Health outcomes still map with apartheid’s racial categories, with Black people dying on average a decade sooner than the average for other South Africans. Poverty-related health inequalities are increasing. Poor people, who tend to be Black, often don’t become aware of their chronic health conditions until they are admitted to hospital for complications, says Tryphine Zulu, a Johannesburg-based health economist with a PhD from UCT. “It’s along income lines, but with whiteness being associated with wealth there’s still those echoes of apartheid in the system,” she says.

HIV may be the most infamous example of South Africa’s health inequalities. In 2017, 7.9 million South Africans were estimated to have the virus, and 7.6 million were Black. The reasons are manifold and start with the apartheid-era practice of moving mine and farm workers away from their families to crowded population centers, where transient sexual encounters created migratory corridors along which the disease spread. Differences in education, income, and employment levels play a role, too. But a study Ncayiyana led jointly with Griffin Bell, an epidemiologist at the University of North Carolina at Chapel Hill, found Black people living in highly segregated areas were twice as likely to be infected with HIV as those living in non-segregated areas, a clear indicator of the impact of structural racism.

The apartheid regime used trumped-up race science to justify segregation, so it should be no surprise that it applied different standards of care for different races. Predictably, Black people were under-prescribed pain medication, in keeping with the global myth that Black people have a higher pain threshold than others. Similarly, Ntusi, a cardiologist, studied cardiology practices and outcomes around the world and found misdiagnosis and poor care mean Black people as a group have worse outcomes worldwide compared to their white counterparts. A 2007 survey of the cardiology database of Tygerberg Hospital near Cape Town found only a few Black patients with heart muscle and arrhythmic disease—a demographic imbalance that is more likely due to missed diagnoses and misdiagnosis than to any genetic bias, its authors write.

A community-focused emphasis on prevention plays to the continent’s strengths, and could be a new public health model for the globe.
Essay

Breakthroughs ahead from African labs

The editor-in-chief of Nature Africa on how the sector has changed since he was a young researcher.

A study of urban fertility clinics in 2015-2016 found that Black couples who could afford in-vitro fertilization consultations had a much more challenging experience than white couples. The researcher, anthropologist Tessa Moll, observed a white clinic staffer ask one Black couple whether they had enough money to raise a child, whether the husband—who owned an informal drinking establishment—was a drinker, whether he had other wives. “These are questions and allusions that I never saw lobbed at white couples,” Moll wrote in a 2021 essay “Medical Mistrust and Enduring Racism in South Africa,” published in the Journal of Bioethical Inquiry.

Moll noted the questions were unlikely to have been malicious, with the clinician probably thinking she was providing what is known as “culturally-competent care.” Ntusi, too, believes few health care practitioners in today’s South Africa mean to be racist. Doctors and nurses, he says, believe they are committed to equality. “They don’t wake up every morning with the intention of treating different populations differently.”

And yet, the data says that on aggregate, it happens.

“A lot of South Africans, not just in medicine, deny that racism is an issue,” says Bonginkosi Chiliza, a psychiatrist at the University of KwaZulu-Natal. “They say that it’s in the past, that it was their parents that voted for apartheid, not them.” But in 2013, Chiliza and colleagues studied the experiences of Black doctors-in-training in the Western Cape province, home to UCT and Stellenbosch University, which also runs a well-regarded medical school. In interviews, these young doctors spoke of being overlooked for training opportunities. They said their decisions were questioned by patients and nurses, and at times referred to white, sometimes junior, colleagues for a second opinion. Other studies document racism and tokenism practiced against Black medical students.

In 2016, Ntusi became a full professor and was able to attend his first meeting of the university senate, which controls academic matters. He says he was alarmed to hear some older white peers question whether “transforming” UCT’s staff profile to better reflect the country’s demographics was necessary. This was a year after the #FeesMustFall protests had erupted across the country, with students calling for fee-free, decolonized education. At UCT, they demanded the removal of racist and colonial symbols from the campus. Black students shared feelings of “not belonging”—just as Ntusi and his Black student peers had felt over a decade earlier.

Since then, there have been talks on how to reform the curriculum to make it more inclusive of students’ diverse backgrounds. Ntusi says some proposals have been more symbolic than substantive, and rooted in platitudes. But there are also serious discussions among university leaders on addressing racism’s legacy, spurred in part by an independent review in 2019 that concluded racism was entrenched at UCT, and had led to a “systematic suppression of black excellence in recent years.” Separately, an investigation into the 2018 suicide of Bongani Mayosi, then the dean of UCT’s faculty of health sciences, found a racist institutional culture likely had contributed to his tragic death.

This year, UCT will publish a new anti-racism policy, which Ntusi calls an “important symbolic, ideological, and maybe pragmatic shift” in the institution’s stance. “People are now no longer debating whether the institution is transformed, but how we work collaboratively to be where we need to be,” he says. UCT has increased the number of Black clinicians and faculty, “making Black excellence both normative and cool,” Ntusi says, and increasing the sense of belonging for Black medical students.

In addition, Ntusi is promoting a ‘five-point treatment’ to increase equity in medical education and practice across the country. This includes embedding racial justice into every aspect of health care. In part, this means pushing “upstream” to address determinants of health and the root causes of inequities. One nationwide step in this direction is the move to create a national health insurance plan, which would void private health plans and redeploy premiums into a national health fund. The government’s goal is to lift the quality of public health care, though critics say this reform will not address structural issues such as underfunded hospitals in Black communities, while others fear corruption will eat away at the fund. “It’s always easy to criticize,” says Zulu, the health economist. Yet, she points to the country’s successful HIV treatment program—the world’s largest—as an example of competent public-sector care. “There was visionary leadership and we saw the outcome.”

At UCT, early results may be more symbol than substance. But even symbols matter. On the “J” floor of the medical school’s administration building, where Ntusi’s office is, the walls were until recently decorated with apartheid-era paintings and photos. Now, they are bare, awaiting more inclusive and forward-looking artwork that Ntusi has commissioned from the university’s art school.

Ntusi hopes the art will anchor the institution in its future, not its past. He acknowledges that a decade from now, students probably will still talk about bias in medical education and care, but he hopes and expects the university will be “at a far more advanced level … with more tangible evidence of change.”

Top photo: Ntobeko Ntusi, cardiologist and chair of the Department of Medicine at the University of Cape Town, his alma mater, is working to root out systemic racism at the school.

Linda Nordling is a science journalist based in Cape Town, South Africa.

Samantha Reinders is a visual journalist based between Cape Town and Kathmandu.

Essential drugs are out of reach for many people with rare diseases, leading to lifelong disability or death. The global drug patent and trade system perpetuates these inequities — especially for low- to middle-income countries.
Ideas