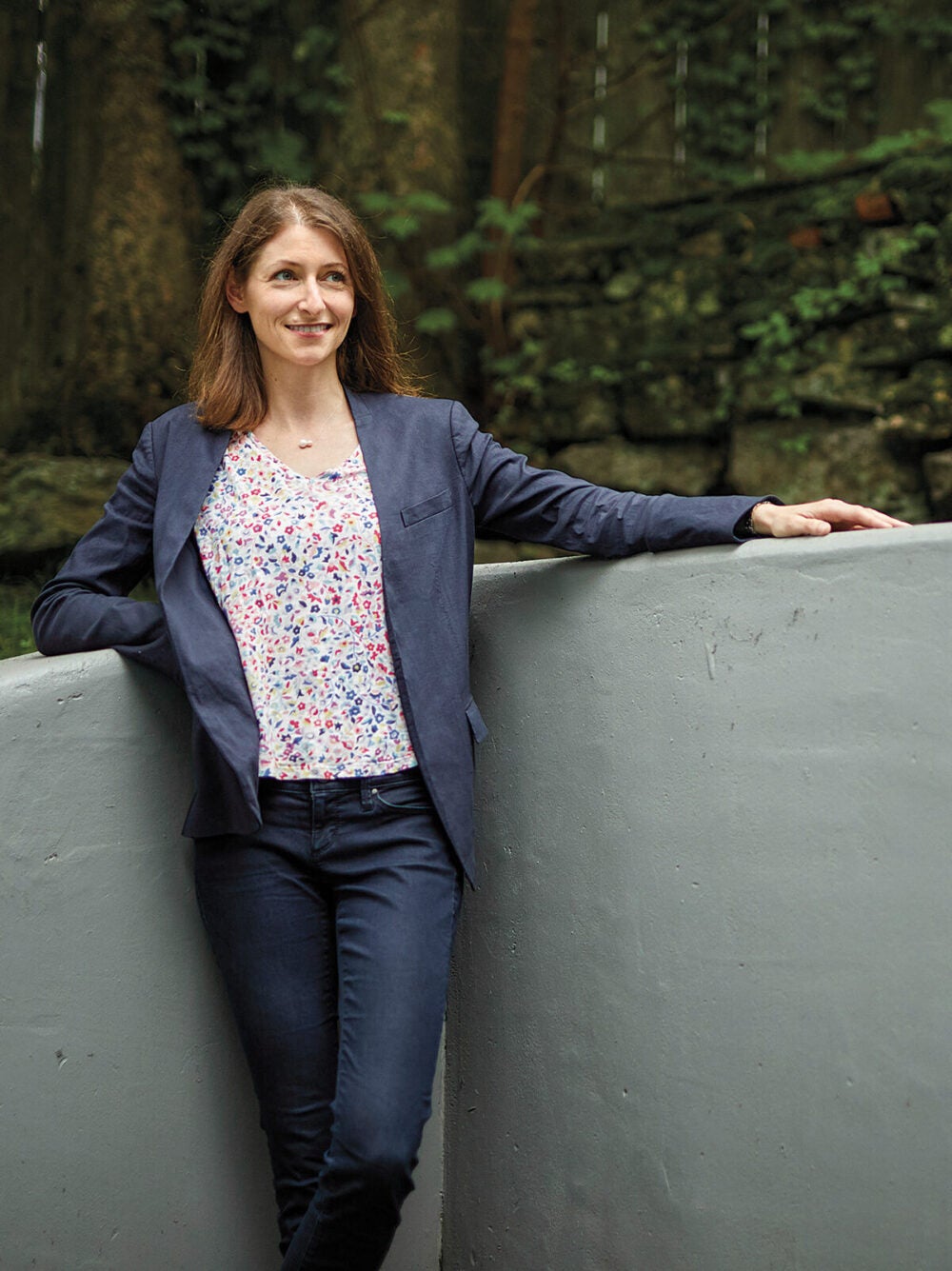 Nora Kory first encountered organelles and their specialized roles within cells in high school biology class. “I was fascinated by how something as small as a cell contains so much structure, and how the structure relates to function,” she says. After studying the role of cells in metabolism as an undergraduate at Ludwig Maximilian University of Munich, she was hooked. Now, Kory, who joined the Harvard T.H. Chan School of Public Health last year as assistant professor of molecular metabolism, is focused on one particular type of organelle—mitochondria. Known as the powerhouse of the cell, these tiny compartments convert oxygen and nutrients into energy to fuel bodily processes and produce the building blocks that cells need to proliferate and perform their functions. In a recent interview, she spoke about why she finds mitochondria so fascinating, and how singing helped get her through a challenging year.

Q: Why are mitochondria important and what do you hope to learn about them?

A: In order for mitochondria to carry out their diverse biochemical reactions, they need to constantly import and export metabolites—nutrients and other substances needed for metabolism. I’m looking at how mitochondria make metabolism efficient, how they adjust according to what our cells need at any point—and how their function can be perturbed in disease.

Mitochondrial metabolism is perturbed in many different diseases, including cancer, diabetes, and diseases of the brain. Cancer cells, for example, proliferate rapidly, so they rely on a constant supply of building blocks and energy that mitochondria play a key role in providing.

We know that there are transporter proteins that allow metabolites to enter and exit through the mitochondrial inner membrane. If we can find ways to target them and modulate their function, then we could potentially change what mitochondria do in diseases.

My lab is also looking at other genes and pathways that we can target to inhibit the growth or alter the behavior of cancer cells. I’m hoping to collaborate with industry to drive the translation of our basic knowledge into something that may ultimately result in new forms of treatment.

Q: You identified two transporter molecules when you were a postdoctoral fellow at the Whitehead Institute. Describe your findings and why they were significant.

A: The first was the mitochondrial serine transporter SFXN1. It’s part of the one-carbon pathway, which is important for a metabolic process known as purine synthesis that provides the building blocks for cancer cells to proliferate. Prior to this finding, we fundamentally did not understand how serine is imported into mitochondria. This is one of the pathways that we may be able to target to treat cancer, but the research is ongoing. There’s always much more to learn.

Another question that I was able to answer was how a molecule called nicotinamide adenine dinucleotide (NAD) gets into mitochondria. NAD is an enzymatic cofactor—basically, a catalyst for respiration and many other metabolic reactions.

I identified the likely transporter as the protein MCART1. It came up in analyses I did using published genetic tools and databases to map the genes involved in mitochondrial respiration. I compared gene essentiality profiles, which are used to measure how important a gene is to a particular cellular process. MCART1 stood out, but its function was previously unknown. So, I was able to build on the knowledge many other scientists have generated before and identify a completely unstudied gene. I connected the dots and was able to find something really important.

Q: You joined the School in October 2020. What was it like trying to set up a new lab during the middle of a pandemic?

A: When people ask me this question, I usually say I don’t have anything to compare it with. This was my first time setting up a lab. It was definitely tough. The School had largely gone remote as a result of the pandemic and there were few people on campus. There was so much to do to set up the lab, like purchasing equipment and figuring out where it all would go, hiring staff, and on top of that, delays, uncertainty, and additional regulations because of COVID-19. I just tried to be patient throughout the process. Now, everything is coming together. I’ve been able to hire a diverse team. Everyone brings unique strengths, and I am excited about the research ahead of us.

Q: What other big research questions do you want to tackle?

A: In the long run, I want to use what we know about mitochondrial transporters and really try to understand more about what happens to different cell types in the brain during diseases like Alzheimer’s and Parkinson’s. In neurodegenerative diseases, the functions of brain cells are compromised. We don’t understand very well
how, but we know that metabolism is one thing that is altered.

I also want to look at what happens in cells when the brain is healthy. The brain uses a lot of energy, and providing it is not a trivial task. That’s where mitochondria are really important.

Q: What excites you about your research?

A: The potential to learn something that will help people—and, ultimately, curiosity. There are so many things that we don’t understand about metabolism and disease. I want to use the tools that I have to contribute to our knowledge in this area. It’s also a way of expressing creativity, by developing new ideas, putting the different pieces we know together, and trying to form the whole picture.

Q: In addition to your scientific work, you’re a mezzo-soprano with the Boston Symphony Orchestra’s Tanglewood Festival Chorus. Do you bring your scientific mind to your singing, or does that tap into a different side of your personality?

A: They are mostly different sides, but they are starting to converge as I am learning to follow my intuition in science more. My voice teacher talks about anatomy, airflow, and coordination of muscles in a very scientific way. It’s helpful to have that training, but when I sing, I try not to think too much, and singing actually helps me shut off the chatter in my brain. During the pandemic, unfortunately, like so many other things, our choir programs were canceled. Instead, I had weekly Skype voice lessons with my teacher. It gave me a lot of stability, because it was one of a few constant things going on in my life during the pandemic and the job transition.

Singing is very tightly connected to your emotional state. So, there were definitely moments during the pandemic when I did not feel like singing at all and couldn’t do it well. But now, I look forward to when our choir activities resume. Singing with other people and an orchestra can be a very spiritual experience. You connect with something greater.

Next Up
Read More
Research

Postpartum health is in crisis

AIDS at 40: The endgame of a global scourge approaches

Phyllis Kanki reflects on the successes and failures of the global response to HIV/AIDS, and the work left to do to finally end the disease.
Research