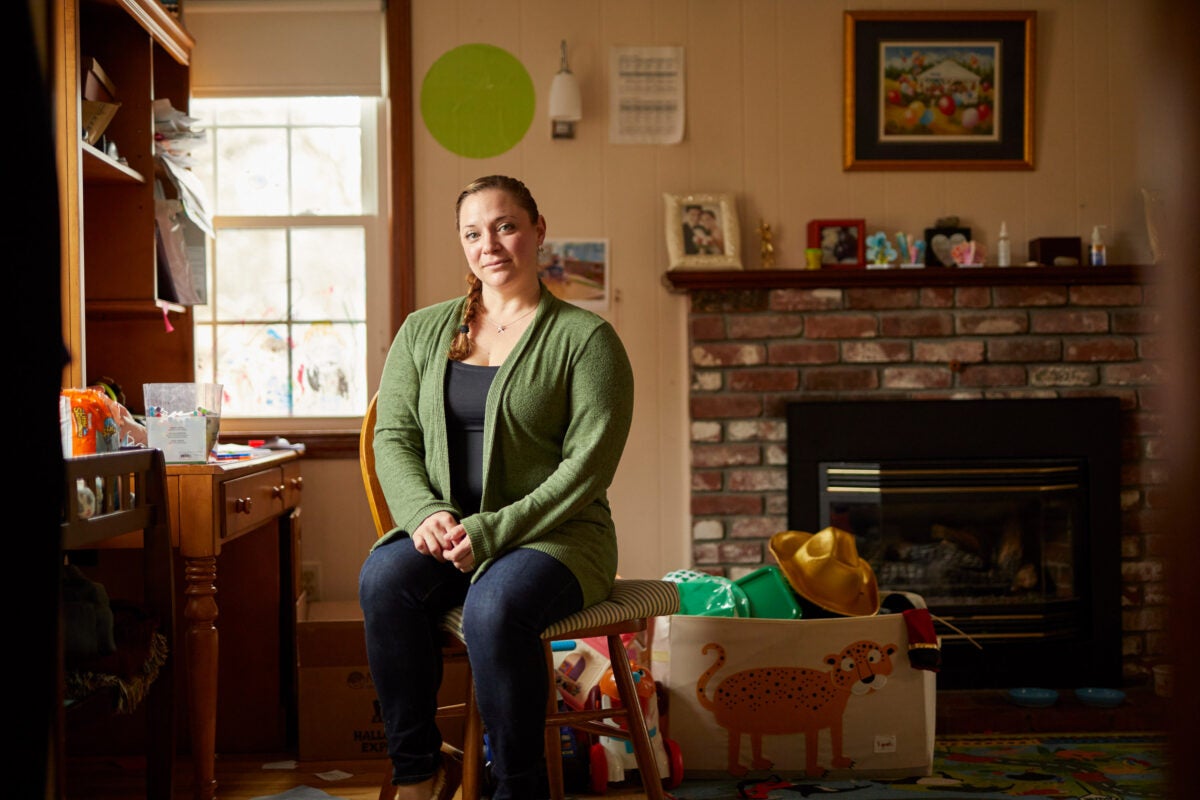 The U.S. has the worst maternal mortality rate of any developed nation in the world, and the problem is only getting worse. The most recent data from the Centers for Disease Control and Prevention revealed that 861 women died from pregnancy and childbirth in 2020, a 14 percent increase over the previous year. That corresponds to 23.8 deaths per 100,000 births. The situation is especially dire for Black women, whose maternal mortality rate is nearly three times that of white women—a shocking 55.3 deaths per 100,000 births.

Many of the deaths result from complications during pregnancy and delivery, like eclampsia or postpartum hemorrhage. But one-third occur weeks or months later, from respiratory or cardiovascular conditions caused or exacerbated by pregnancy or from suicide in women struggling with mental health issues.

“Women are left to fall off a cliff after delivery,” says Jessica Cohen, Bruce A. Beal, Robert L. Beal, and Alexander S. Beal Associate Professor of Global Health. She says the drop-off in medical attention for mothers “is a pretty stark contrast to how often pregnant patients are seen for prenatal care.”

Cohen and other researchers at the Harvard T.H. Chan School of Public Health are studying ways to improve postpartum health. As Cohen outlined in JAMA Health Forum last year, strategies range from small changes in care, like personalized postpartum plans, to steps that would require a major overhaul of the U.S. health care system. But none of them, says Ana Langer, a professor of the practice of public health in the Department of Global Health and Population, are rocket science.

“We know everything that we need to do to make maternal health better,” says Langer, a reproductive and maternal health expert who heads the School’s Women and Health Initiative. “More than 90 percent of maternal deaths could be prevented if women had timely access to quality care, but they don’t.”

Women typically receive more medical attention when they are pregnant than at any other time until old age, so health issues can be detected that might otherwise have gone undiagnosed. Pregnancy itself can also trigger conditions like high blood pressure or gestational diabetes. Women are carefully monitored and treated for these underlying disorders while they’re pregnant, but there is rarely adequate follow-up care for the mother after she’s given birth.

In the U.S., most women have one six-week postpartum visit to see how they are faring. If concerns arise during that visit, like postpartum depression or persistently elevated blood pressure, there should be a coordinated transfer of care from the OB-GYN to a primary care provider or mental health professional, Cohen says. Instead, women are often left to manage their health on their own—while they’re also dealing with a newborn baby and sleepless nights.

Cohen calls this both a missed opportunity to keep women engaged in their health and a grave disservice, because complications from pregnancy can put a woman at greater risk for future health issues. For Cohen, a behavioral economist and a mom of two, the issue is personal. She developed preeclampsia at the end of one of her pregnancies, which increases her risk for hypertension, heart disease, and stroke later in life. After she gave birth, she had to navigate the health care system alone, scheduling follow-up appointments, checking that her medical records were transferred, and making sure her insurance would cover her follow-up care.

“You can see how so many people fall through the cracks,” she says, especially women who already face inequities in care. “We need to build up the scaffolding to support this transition to primary care and not just leave women to do this on their own.”

One way to close the gap in care might be health worker house calls. South Carolina recently expanded an initiative offering first-time mothers who qualify for Medicaid regular prenatal and postpartum home visits from nurses. The nurses assist with everything from medical care, like taking blood pressure, to helping the women register for benefits via the Special Supplemental Nutrition Program for Women, Infants, and Children.

The initiative is in collaboration with the national Nurse-Family Partnership, and it extends the option of home visits from 600 women up to 1,000.

Success would mean improving birth outcomes, including maternal morbidity, preterm birth, and low birth weight. However, those types of health-related measures are notoriously difficult to change, says Margaret McConnell, associate professor of global health economics, who’s been enlisted to evaluate the program’s impact. She says longer-term sociological metrics, like early childhood development, time between births, and education and employment opportunities for the mother, will also be used to measure success. “The real evidence of what the program does is probably many, many years down the line,” she says. “Interventions that happen in that very early childhood space take a long time to show themselves.”

For one thing, if nurses find a mother has a medical condition, whether she receives medical attention is out of their control. That’s because South Carolina has opted out of Medicaid expansion, meaning new moms typically lose health insurance 60 days after they give birth. Without insurance, getting medical care “is very hard to do,” says McConnell.

A federal mandate extending Medicaid to the entire postpartum year is an obvious policy fix. The Biden administration included an optional provision in the American Rescue Plan Act, passed in 2021 in response to the COVID-19 pandemic, but currently only 28 states have adopted or are considering the postpartum extension. The additional benefits are not without a substantial cost. The Congressional Budget Office estimates that extended coverage will require roughly $6 billion of federal funding over the first 10 years.

33.1% of pregnancy-related deaths occur between a week and a year after delivery.

42% of births in the U.S. are covered by Medicaid. For the vast majority of women, postpartum coverage ends after just 60 days

63% of women report symptoms of postpartum depression, making it the number one complication of pregnancy and childbirth

22% of women who score positive for postpartum depression receive treatment. Follow-up and other interventions were found to increase use of mental health care services.

Ensuring care for the most vulnerable

Health insurance is just the beginning, though. Actually accessing medical care is its own hurdle—one that disproportionately impacts Black and brown women. From 2003 to 2013, 10 percent of hospital obstetric (OB) units in the U.S. closed, and these closures were more common in communities of color. Alecia McGregor, assistant professor of health policy and politics, found that losing a local delivery ward was associated with a greater risk of severe maternal morbidity for women of all races, but Black and Hispanic women saw the greatest increases.

When an OB unit closes, women’s quality of care throughout the prenatal period takes a hit, because the OB-GYNs often leave too, McGregor explains. “Not only do patients not have hospital-level OB services, but they lack OB-GYNs, they may lack nurse-midwives, they lack almost the entire continuum of maternity care.”

As a result, women often must travel farther to receive prenatal and postpartum care, to facilities whose OB units can become overwhelmed in the effort to absorb these new patients. Greater burdens in accessing care typically correspond to worse outcomes for the most vulnerable, such as low-income women or those for whom English is not their first language.

Another issue: The health care facilities most likely to close have the most patients insured by Medicaid. Because health care providers receive lower reimbursements from public versus private insurance, OB units or hospitals in low-income areas might suffer financial challenges and be forced to close. Lower reimbursement rates also deter some private practice physicians from providing care for patients on Medicaid. This can clog the few facilities that do accept Medicaid. As part of her research, McGregor interviewed women who couldn’t get a prenatal appointment until their second or third trimester because of the wait-list at the one local clinic that worked with public insurance. “It’s set up so that it’s a cost for hospitals and providers to take these patients,” says McGregor. “In that regard, the payment system really reinforces existing inequities.”

McGregor says one way to address this problem would be to encourage state Medicaid programs to reimburse more for OB services so that providers aren’t disincentivized from taking on those patients.

None of these concepts are new. In countries that guarantee universal health care and paid family leave, and where postpartum home visits are the norm, maternal mortality rates are significantly lower.

In the U.S., “maternal health has not received the kind of attention or priority that could make it better,” Langer says.

“It’s not a matter of investing more money,” she adds. “This is the country with the most expensive health care system ever. The resources are here; it’s just that they are not accessible to the people who need them.”

Ashley Healy, a 37-year-old former trial lawyer who lives in the Boston suburbs, is one of those women. Healy’s first pregnancy had resulted in a miscarriage, so she was overjoyed when she conceived again. But the birth was traumatic, involving 48 hours of labor, a postpartum hemorrhage, and passing a blood clot the size of a softball. When she took her son home just two days later, she was sleep-deprived, in debilitating pain, and absolutely terrified.

During the first six weeks after giving birth, she would walk around the house for hours in the middle of the night, holding her son and crying because he wouldn’t go back to sleep. After wanting this baby so badly, she felt no connection to him. She couldn’t understand it. “I was so happy when I was pregnant,” she says. Healy chalked up her feelings to sleep deprivation and a case of the “baby blues.” She says, “I thought postpartum depression meant that you wanted to hurt your baby. I didn’t want to hurt him; I just didn’t really feel like I loved him very much.”

At her six-week postpartum appointment, Healy was screened for depression using the Edinburgh Postnatal Depression Scale, but no one ever followed up with her about her score. Fortunately, Healy found a local new mothers’ support group that helped her process her feelings and, most importantly, realize she wasn’t alone. Around that time her son also started to smile, which she says helped her stop feeling like she “wasn’t a good mom.”

Women who’ve had postpartum depression are more likely to experience it again after subsequent births. But when she was pregnant with her next child, Healy says no one ever mentioned it to her. In fact, it was only when she saw a copy of her medical records that she realized what she had experienced was postpartum depression. “I find it stunning,” says Healy, who now serves as the coordinator of the Ellen Story Commission on Postpartum Depression. “You’d think I would have gotten flagged a different way or followed up more, but I didn’t. No one ever even told me I had it, they just put it in my notes.”

Dana Smith is an award-winning health and science writer based in Durham, North Carolina. Her work has appeared in the New York Times, Scientific American, The Atlantic, STAT, and more.

AIDS at 40: The endgame of a global scourge approaches

Phyllis Kanki reflects on the successes and failures of the global response to HIV/AIDS, and the work left to do to finally end the disease.
Research

Mitochondria can be fascinating.
Research