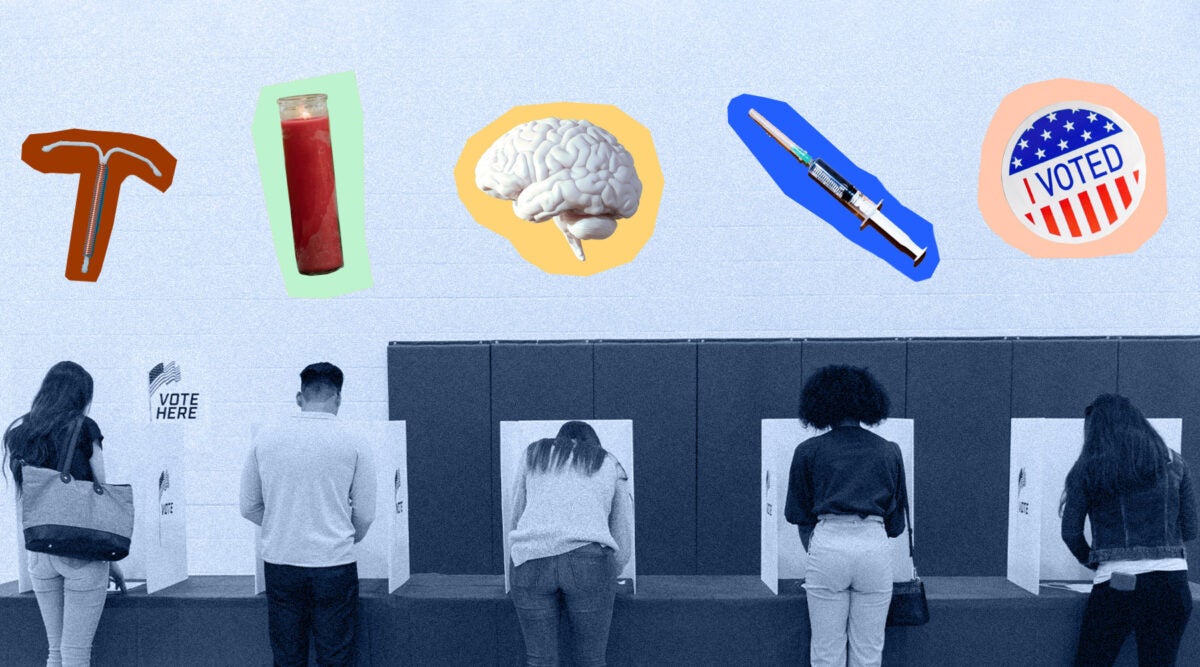 Voting is essential to engaging with democracy and our health. Tuesday’s midterms will determine the future of our health policy.

Policies can curb or exacerbate public health emergencies like gun violence, teen mental health, and “deaths of despair” from opioid overdoses and alcohol-related liver failure. Our votes can actively improve or harm health outcomes for all of us, which is why the American Medical Association has called voting a “significant determinant of health.”

Not only does voting impact the laws and policies that determine health outcomes, voting itself is correlated with better health. People who vote tend to have higher incomes and social capital, both of which predict better health. They are also more likely to be insured. One survey found that 63% of Americans with health insurance voted in the 2016 presidential election. Only 34% of those without insurance voted.

The people most in need of policies that support public health care vote at far lower rates, meaning their voices are not reflected in the country’s policymaking. As I wrote last year, voting is “an essential public health duty,” that must not be “stolen, infringed upon, or abused.”

Here are five public health reasons to vote next Tuesday.

Vote to protect reproductive choice and health. In the wake of the Dobbs decision, half of voters nationwide (50%) report that abortion policy has made them more motivated to vote in this year’s midterms, especially Democrats, independents, and women.

Abortion bans trap victims in a cycle of domestic violence

Vote to stop gun violence. Vote for a candidate that supports a public health approach to guns. That means supporting red flag laws, investing in crisis prevention services, and other evidence-based gun safety measures. Every day, more than 110 Americans are killed by guns. And 58% of American adults have had someone they care about impacted by gun violence. It is a public health emergency.

Vote for healthy minds. U.S. children are experiencing a mental health crisis. During COVID-19, 37% of high schoolers reported they experienced poor mental health, and 44% felt consistently sad or hopeless. Over 60% of youth with major depression do not receive any mental health treatment. Elect officials who will increase access to mental health care, especially for children.

Vote to prevent drug overdoses. In 2021, drug overdose deaths topped 100,000, with the biggest increase among young people ages 15-24. These deaths disproportionately impact people without health insurance, the formerly incarcerated, and people living in poverty. Look for candidates who support a public health approach to the overdose epidemic, including increasing harm reduction services.

Vote to protect your right to cast a ballot. Although we are on track to match 2018’s historic midterm voter turnout, the U.S. still lags far behind other high-income countries in voter participation.

A wave of voter restrictions could mean fewer people make it to the polls next week. When large numbers of the public are silenced, the health policy set by our elected officials is no longer created by and for everyone. Voting restrictions not only violate civil rights, but also undermine health. By nature, suppressing the vote prevents a healthy, just society. Vote for candidates who actively counter forces seeking to undermine democracy and are committed to equitable voting access.

Get out to vote on Tuesday. It will be good for your health.

With an early diagnosis lung cancer is no longer a death sentence. Annual screening could save almost 25,000 lives.
Ideas

The new bivalent booster protects against the original COVID and the dominant Omicron variant. And yet, only 5% of adults eligible for the new COVID booster have received it. Local health departments can change that.
People