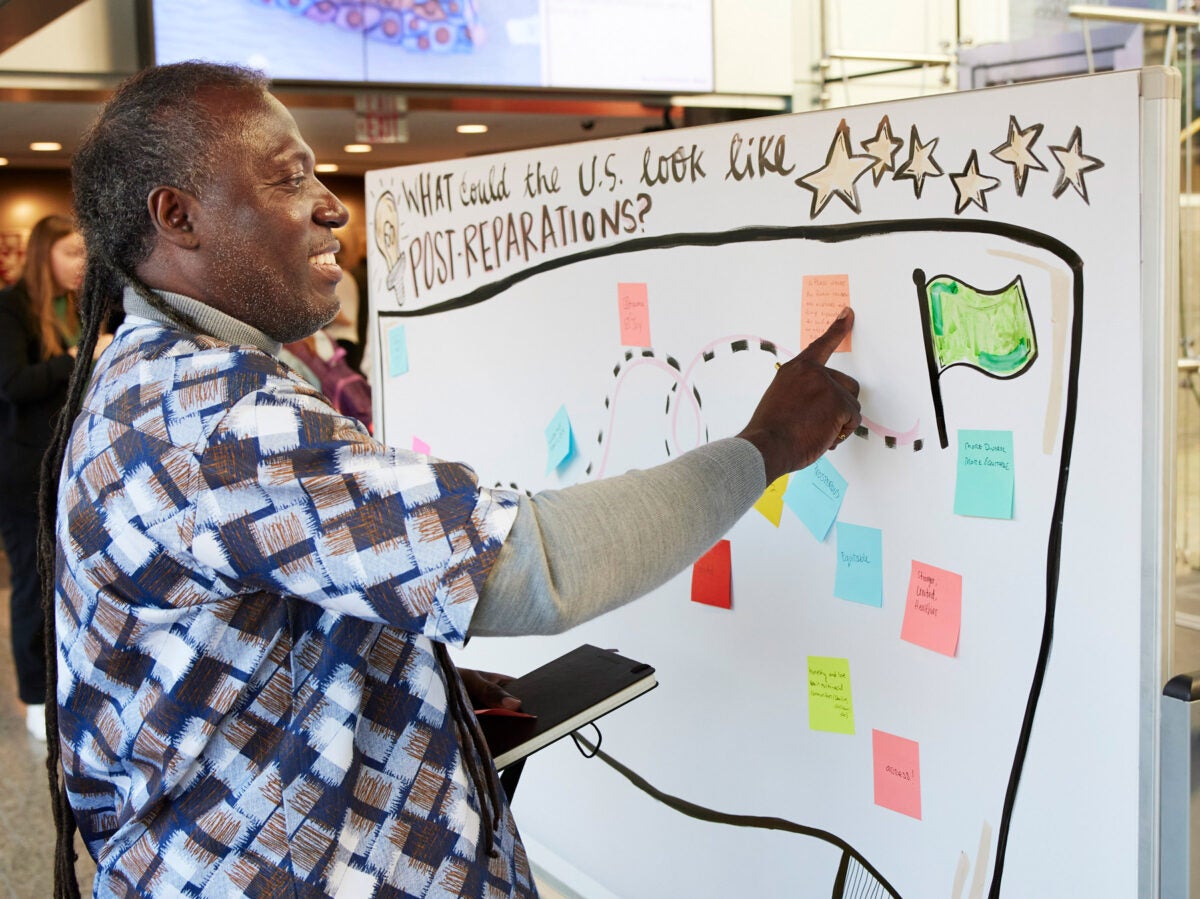 As reparations to Black Americans for harms from centuries of slavery and structural racism has gained currency, it has mostly been discussed as monetary compensation for descendants of the formerly enslaved. A Nov. 3 symposium co-hosted by Harvard’s FXB Center for Health & Human Rights and Harvard Public Health magazine considered the issue from a different perspective—health.

“The racial health gap is every bit as stark as the racial wealth gap,” Michelle Williams, dean of the Harvard T.H. Chan School of Public Health, said in her opening remarks. White households on average have up to eight times as much wealth as Black ones. Meanwhile, decades of attempts to address anti-Black racism in health have mostly failed to shift gaps in life expectancy, infant mortality, and rates of cancer, asthma, and diabetes. Without reparations, “we will never close the yawning gaps in health,” said Mary Bassett, acting health commissioner for the state of New York and former FXB Center director.

Bassett made her comment in conversation with Sandro Galea, dean of the Boston University School of Public Health. The two recently wrote an editorial on the topic for The New England Journal of Medicine, and Bassett separately called on public health leaders to assert themselves in the movement for reparations. Bassett said shifting the focus from economics to health might boost public acceptance for reparations, an idea that has yet to gain ground as federal policy. House Resolution 40, a bill calling for a commission to study reparations, has repeatedly stalled in committee despite having nearly 200 co-sponsors in the House. But as Bassett said, “there is a social consensus that we all deserve to be healthy.”

The symposium, “Can Reparations Close the Racial Health Gap?” gathered a diverse group of scholars, activists, and other leaders—most of them Black Americans, and a majority of them women—including American Medical Association Chief Health Equity Officer Aletha Maybank; Duke University professor William “Sandy” Darity Jr., coauthor of From Here to Equality, the definitive book on reparations; and Kamilah V. Moore, a reparatory justice scholar and chair of California’s Reparations Task Force.

One theme of the event was that reparations isn’t a new concept, even in the U.S.—the U.S. paid reparations to Japanese-Americans interned during World War II, and more recently made disability compensation available to veterans affected by “burn pits” in Iraq and Afghanistan. Indeed, the U.S. even compensated slaveowners after emancipation—but not to the formerly enslaved, breaking a promise to freedmen of “40 acres and a mule.” Speakers on a panel discussing the media and reparations noted that journalists throughout history have rarely called the payments reparations, a contributing factor to what Human Rights Watch’s Dreisen Heath called an “uphill battle” to acting on reparations now.

Speakers presented a raft of strategies for pursuing reparations and how they might meaningfully impact racial health disparities. Darity, attending remotely from North Carolina, detailed how his research established a value of approximately $840,000 per household or $350,000 per individual—a total amount of $14 trillion—to compensate Black descendants of slavery. “Part of my work is trying to bridge the gap between public health and law,” said Darity. “As we talk about the social determinants of health, law and structural racism are root cause to many of those disparities.” He pointed to labor and housing laws applied discriminatorily against Blacks and other people of color, which led to occupational and neighborhood health hazards. Darity contended that only the federal government could address the magnitude of reparations required for these centuries of abuse and neglect.

A reef gets a reboot in Madagascar

Other speakers advocated for state and local governments to lead the way on reparations, including Boston city councilor Julia Mejia. After speaking at the symposium, Mejia went directly to a meeting that finalized a city ordinance to establish a 15-member commission to study reparations for Boston’s Black residents (a final vote is scheduled for next month). Robin Rue Simmons, director of the non-profit FirstRepair and former alderman for the city of Evanston, Illinois, detailed how the city passed the nation’s first municipally-funded reparations bill, which earmarked $10 million from sales tax on recreational marijuana to offer $25,000 housing assistance grants to Black residents.

In a powerful closing keynote address, Moore described the work of California’s Reparations Task Force, which recently produced a 500-page report to advise the reparations process in California, accounting not only for slavery, but also for sharecropping, redlining, unfair labor practices, predatory lending, police brutality and other harms inflicted on the African American community. It recommended to the legislature that Black Californians who had spent their lives in the state were entitled to almost $1 million.

Better methods of measuring and communicating structural racism’s effects were also put forth. Rachel Hardeman, director of the Center for Antiracism Research for Health Equity at the University of Minnesota, said applying geographic and historical context and engaging with communities will yield measures with “the potential to inform policy in a lot of critical ways.” Hardeman said she is working on a data portal accessible to the public.

Several speakers stressed the importance of working with communities to examine how disparities in health, education, housing, and other areas affect them, and what forms of redress would be most meaningful.

“We’ve heard almost every single panel talk about collective action and solidarity and the importance of doing,” said Maybank in closing remarks. “I know there are a lot of doers and folks who are about action in this room, and I hope they are inspired to do something different and with each other.”

A recent Harvard panel discussion examined how biases in the media affect coverage of reparations for Black Americans.
People

California’s new task force is a first of its kind effort to quantify the harms of slavery. Next up, recommendations for real steps to remedy.
Opinion