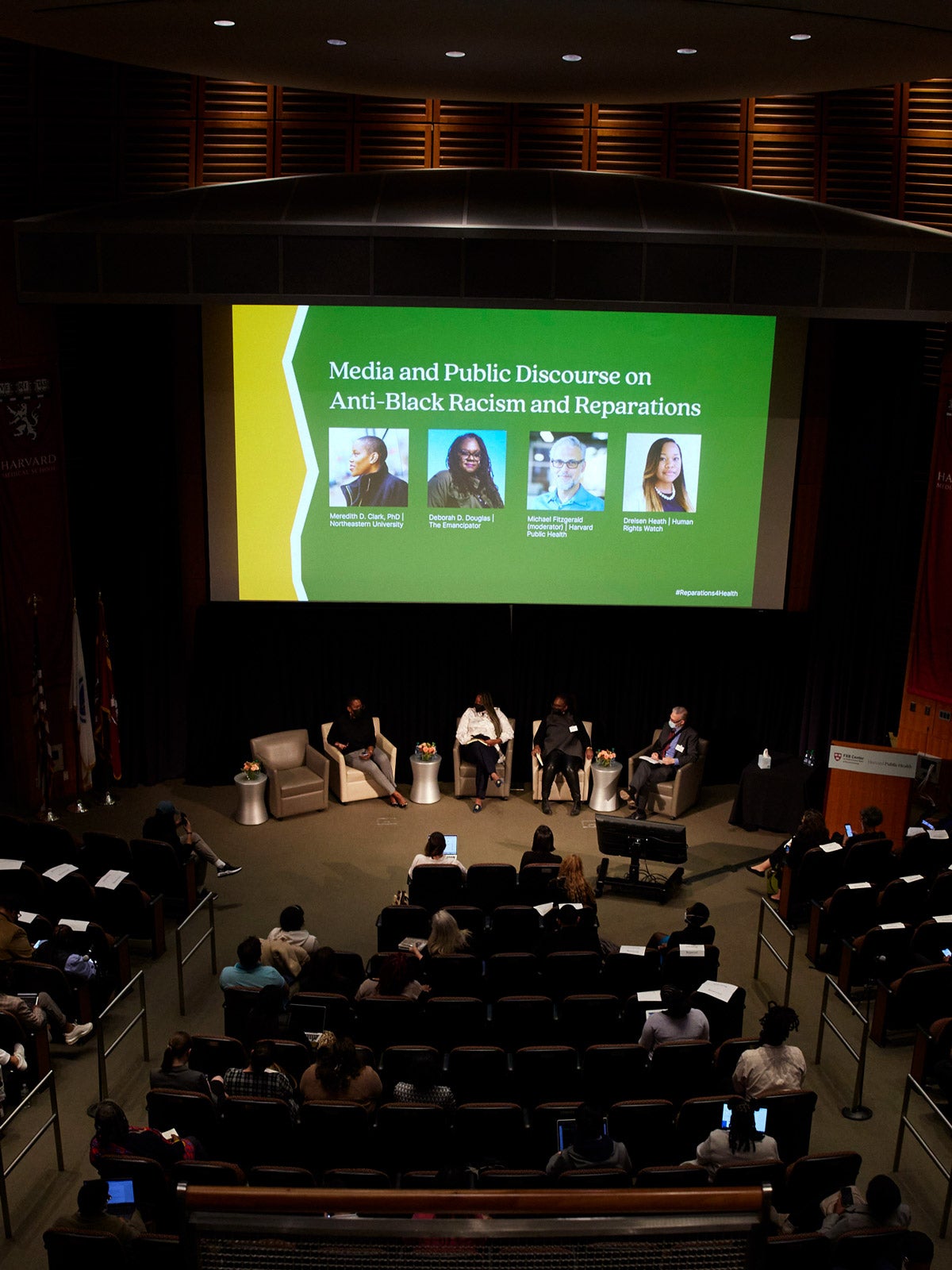 To witness racism in the media, look no further than the vastly different coverage applied to the crack cocaine epidemic in the 1980s, which largely affected Black communities, and the opioid epidemic of the 2000s, which has affected more white Americans.

“The crack epidemic was covered as though this was something that hundreds of thousands of people just decided to do on a Friday night, and that’s how they got hooked on drugs—rather than taking a look at the communities that they came from and the options available to them,” said Meredith D. Clark, associate professor in journalism and communication studies at Northeastern University. “Now that we are covering the opioid crisis, we see a lot more emphasis on the antecedents that lead people to use or abuse drugs.”

Clark made the comment during a recent panel discussion at Harvard titled “Media and Public Discourse on Anti-Black Racism and Reparations,” a wide-ranging exploration of anti-Black bias in media, and how it has affected the current debate on paying reparations to Black descendants of slavery. The panel was part of a day-long symposium on Nov. 3 looking at reparations as a public health issue, co-hosted by Harvard’s FXB Center for Health & Human Rights and Harvard Public Health magazine. Other panelists included Deborah D. Douglas, co–editor-in-chief of The Emancipator; and Dreisen Heath, a researcher and advocate with Human Rights Watch focusing on racial justice.

“Reparations for enslaved people is not a new idea by any means,” said Harvard Public Health editor-in-chief Michael Fitzgerald, who moderated the panel. At the same time, he noted “how little communication there is on it, and how what gets said is often veiled at best.” While reparations for other groups, such as Holocaust victims or veterans exposed to toxic burn pits, are presented in terms of the physical and mental health effects they’ve suffered, when it comes to reparations for slavery, he said “the lens on it is almost always economic.”

Panelists explored the historical reasons for such bias. “What we traditionally call objectivity, I look at as a white cis male Western default,” said Douglas, who recently wrote a book following the U.S. Civil Rights Trail to uncover untold stories of the fight for racial justice. When it comes to Chicago, where she used to live, she said the national media almost always focuses on the predominantly Black South Side neighborhood from a “deficit frame” focusing on crime and poverty rather than an “asset frame” that lifts up the positive accomplishments of residents. “When you ask the question from that perspective—Who are you trying to be? What’s your vision for life?—we get such a different story. It is miraculous, and it’s magical.”

Heath, a native of Tulsa, Oklahoma, told Fitzgerald that it took the local newspaper 80 years to write an article about the massacre of residents of Tulsa’s “Black Wall Street” by white vigilantes in 1921. She noted the irony that more recent media coverage of a new sports arena and history center in the neighborhood is presented as a story of economic recovery, without recognition that the new development will further displace descendants of the massacre from the neighborhood.

As a form of redress, Clark has argued for a “reparative journalism” that would send reporters into Black communities to spend time talking with residents and understanding the effects of centuries of systemic racism from a human perspective. “Reparative journalism takes those folks who continue to be marginalized and places their perspectives and vulnerabilities at the center of the practice,” she said.

The same frame must be applied to the debate over reparations itself, added Heath. “Reparations is a buzzword and a process, but beneath that process are human beings. We need to know their lived experience and humanize reparations in a way that doesn’t make it so distant.”

While journalists are apt to write sympathetic stories about soldiers who suffered health impacts from burn pits, she said, they often dismiss reparations as a political fight—calling it an “uphill battle” even though nearly 200 members of Congress have co-sponsored a bill to study the issue. “I want journalists to be able to take the fight and inform the public in a way that is truthful,” she said. “Do not say this is an uphill battle.”

Despite the persistent biases in traditional media, none of the panel’s experts advocated for dispensing with traditional media, for example, by pursuing a strategy focusing solely on grassroots or social media. “We need every tool we have available, every single one,” said Clark. At the same time, they all urged journalists to do better in the depth of their reporting. “The harms we have experienced in this country are multifaceted and complex for a very distinct reason,” Heath said. “Journalists in the media have got to be committed to being in it for the long haul, and to doing long-term investigations and not cheating the complexity of the issue.”

California’s new task force is a first of its kind effort to quantify the harms of slavery. Next up, recommendations for real steps to remedy.
Opinion