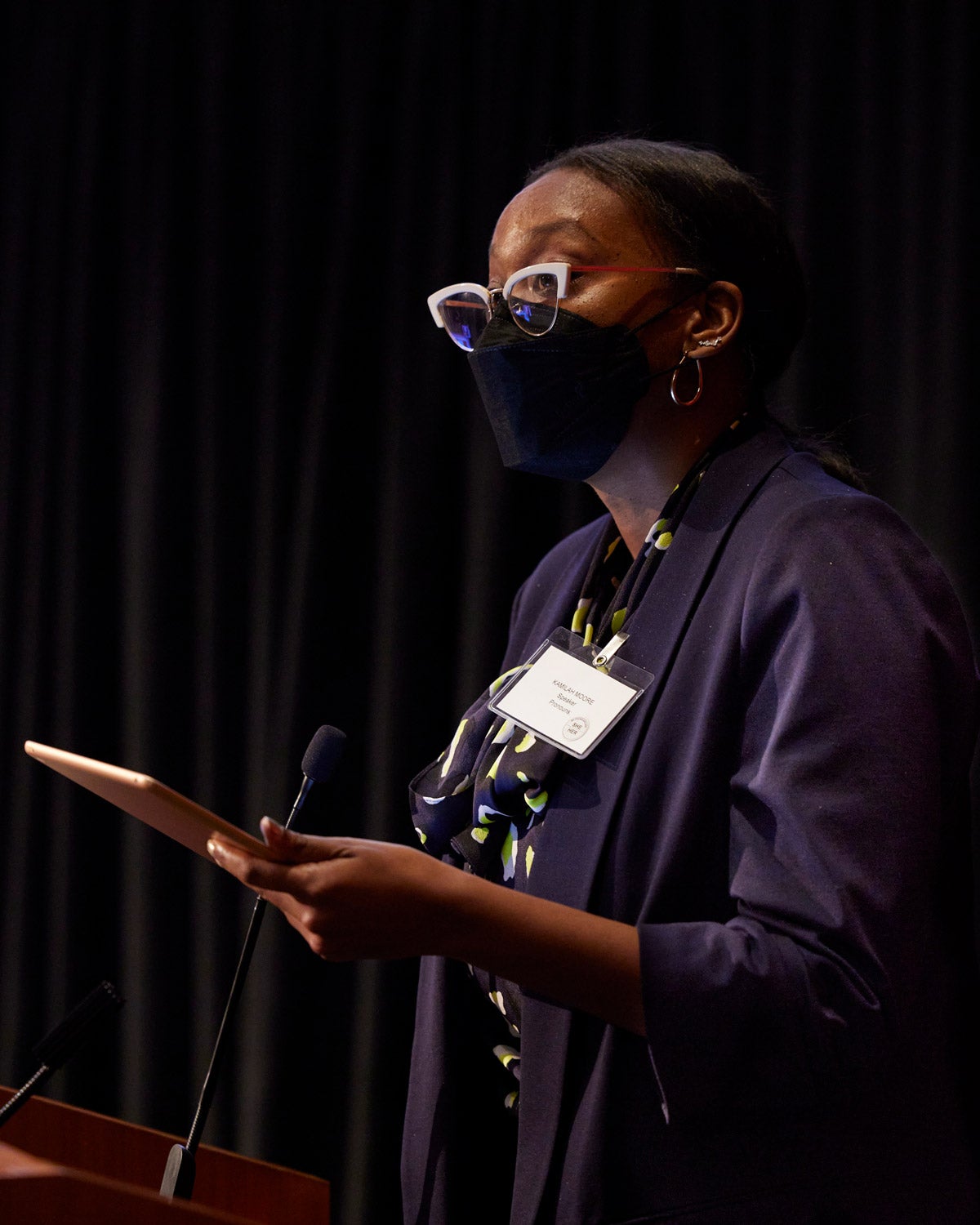 California is the first U.S. state to assemble a task force to quantify the effects of enslavement and subsequent oppression and discrimination on its Black residents and recommend ways to redress these harms, including racial health disparities. The nine-member California Reparations Task Force was established as an advisory body to the state’s General Assembly in June 2021 and held a series of public hearings, both in-person and virtual, to get input on the question of reparations.

It released an interim report in June 2022 and has continued holding public meetings while preparing its final report. The Task Force’s chair is Kamilah V. Moore, a Los Angeles-based lawyer and activist. She spoke with Harvard Public Health recently about the harms the Task Force documented and the potential remedies.

Q. What kind of health issues did enslavement create for African Americans?

Moore. The health disparities between European Americans and African Americans today are directly connected to the institution of slavery. It’s at least partly responsible for the fact that African Americans have had the worst healthcare since we’ve been in this country. Since its founding, Black people have been getting sicker and dying younger than white people.

Q. How did the health of African Americans fare in the years since enslavement, or after slavery ended in most states?

Moore. In addition to slave owner torture and medical experimentation on enslaved people, racist myths about Black people and their health have contributed to inadequate health care. For example, after slavery, Congress considered establishing the ‘Freedmen’s Bureau,’ a program that would include government-funded healthcare for the newly freed Americans. But white legislators argued that assistance to free Black people would result in dependence.
Then in the late 1800s, housing discrimination against Black Californians pushed them into overcrowded, segregated housing with inadequate access to sanitation, clean drinking water, and food, which led to illness and death. But public health agencies concluded that African Americans’ “naturally” weaker immune systems and “irregular habits” caused their deaths. Today, forced homelessness is still leading to illness and death among disproportionate numbers of Black Californians.

Health intersects with so many other issues [that] the health impacts are not always obvious. African Americans have significantly higher stress in many areas of their lives. Police brutality, mass incarceration, and housing discrimination contribute to that stress. It all leads to depressive symptoms, poor self-rated health, functional physical limitations, and chronic illness. Again, these correlate with elevated mortality.
We had expert testimony on transgenerational epigenetic inheritance. It describes how the negative effects of one generation’s adversity and trauma can affect the health and well-being of children, grandchildren and great grandchildren. This results in mental disorders and substance use linked to trauma, and an increased risk of health problems like cancer, heart disease, and diabetes.

Q. How has the task force been addressing reparations for health disparities?

Moore. We brought in a group of economists and asked them to think about what compensation might look like for a plethora of different state-based atrocities. They came up with $127,000 per year of the life expectancy gap between Black and white Californians. That comes to just under $1 million for each Black Californian descended from slaves.

California can’t pay all that, so we have to look at ideas for giving them the value of that life expectancy gap. Creating free health care programs, or medical clinics, is one of the preliminary recommendations.

Q. What is the Reparations Task Force doing in its final year?

Moore. Our interim report listed 12 major areas of systemic discrimination that still negatively impact the African American community today. We call them the “badges and incidents” of slavery our ancestors experienced. These are things such as housing segregation, separate and unequal education, racism in environment and infrastructure, stolen labor and hindered opportunity, mental and physical harm and neglect, and the wealth gap. The task force will hold meetings until next July.

In December, when the task force holds its next public meeting in Oakland, there might be even more requests for the economic consultants to come up with further monetary reparations. We expect to hear policy proposals from the public as well.

Later on, we on the task force will be discussing amongst ourselves which ideas for legislation to move forward to the legislature.

Leah Samuel is a freelance journalist based in Boston.

A Harvard symposium examines the public health case for reparations to Black descendants of slavery and what remedy might look like.
Opinion