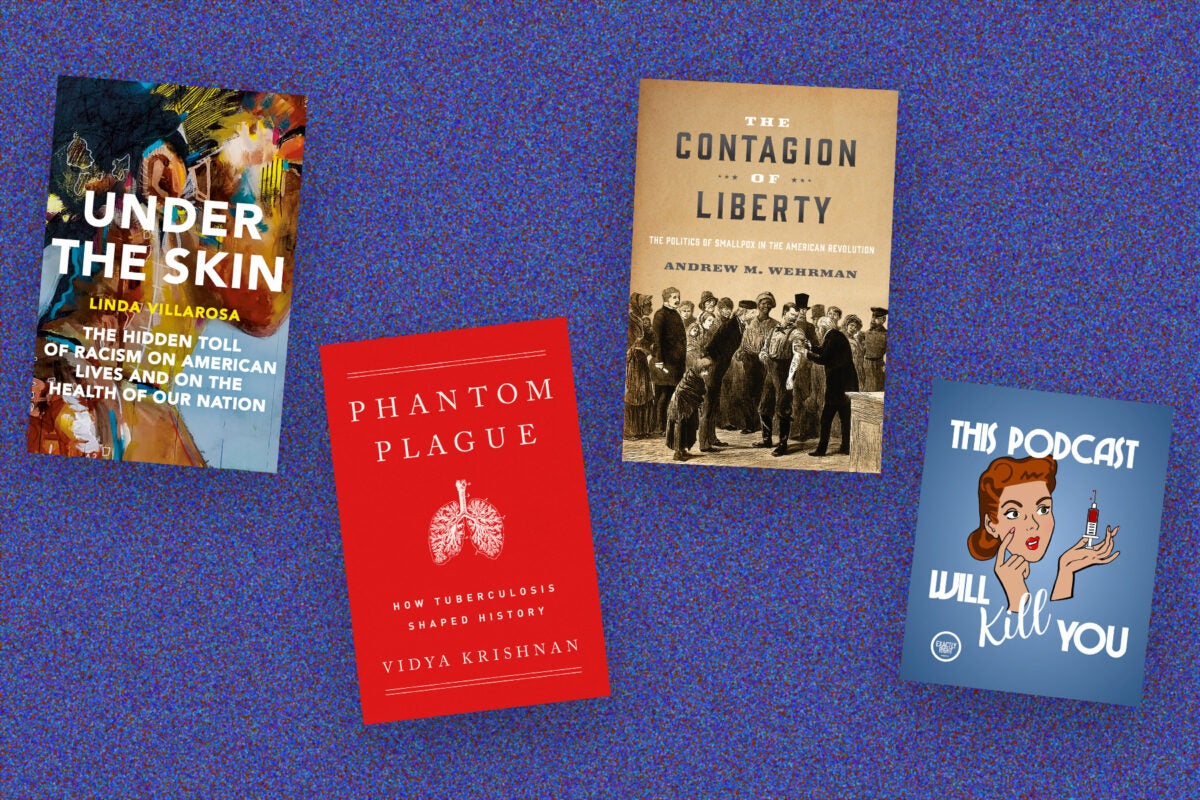 Under the Skin: The Hidden Toll of Racism on American Lives and On the Health of Our Nation by Linda Villarosa. This revelatory book shares how Villarosa, a much-decorated health journalist, over time realized her care depends not on her talent or her status but on the color of her skin. Yes, Villarosa is on Harvard Public Health’s Advisory Board, but we’re not playing favorites – it’s a book good enough to make the New York Times’s 10 Best Books of 2022. A gifted writer and reporter, she weaves pop culture and peer-reviewed research into a stunning narrative about bias. Though the stories she shares are outrageous, Villarosa dwells not in outrage but in optimism about the potential for more equitable care. This book will indeed get under your skin. – Michael Fitzgerald

Read the Guardian’s review | Get the book

Raising Lazarus by Beth Macy. From the acclaimed author of Dopesick, now a television series, Macy’s new book has been heralded as a deeply reported, fearless exploration of ways out of the nation’s opioid epidemic. Raising Lazarus openly advocates for “harm reduction,” an approach to treating addiction we’ve covered in HPH’s pages that argues for access to support like clean syringes, safe injection sites, and social services to reduce the risk of overdose and death. As the overdose epidemic rages on, Macy’s book is an essential read for understanding the state of the crisis, and options for climbing our way out of it. –Christine Mehta

Read the New York Times review | Get the book

Phantom Plague by Vidya Krishnan. A deep dive into the social history of the world’s “oldest disease,” Krishnan’s debut book is a hard-hitting, fast-paced tour of how tuberculosis became known as “the captain of death.” Tuberculosis once caused nearly a quarter of all deaths in Europe and the U.S. As Krishnan charts TB’s course through history, she traces the origins of germ theory from the fictional Dracula’s “miasmatic cloud” to the discovery of bacteria. She details early public health failures to contain the disease, including an unsuccessful U.S. campaign to ban spitting. Once started, it’s hard to put the book down. – Christine Mehta

How to Prevent the Next Pandemic by Bill Gates. Some rich guys want to make the world their playground. Gates wants to save the world so it’s everybody’s playground. This book follows his How to Avoid a Climate Disaster (2021) to form an anti-apocalyptic blueprint. Gates is a controversial figure in global health, and he spends part of his introduction acknowledging and addressing criticisms of himself and his foundation. He is, though, a stalwart supporter of public health, and people in the field will recognize his four-point plan to prevent the next pandemic. Gates could also be called overly idealistic, but that’s not a bad thing to have in a champion, especially in the wake of a global crisis. – Michael Fitzgerald

Read the New Scientist’s review | Get the book

The Contagion of Liberty: The Politics of Smallpox in the American Revolution by Andrew M. Wehrman. Wehrman, a historian, looks back to pre-Revolutionary America’s struggle against smallpox outbreaks to shed light on present-day attitudes towards American public health and politics. He details an effort that found early success, but eventually foundered as vaccination became privatized and civic duty withered. Instead, as Nature reviewer Heidi Ledford writes, “public health was displaced by the idea of disease as a consequence of personal negligence. Public health measures were increasingly viewed with suspicion.” The book, although rooted in history, holds contemporary lessons for American public health. – Christine Mehta

Read Nature’s review | Get the book

I want to die but I want to eat tteokbokki by Baek Se-hee. Translated from Korean by Anton Hur. Lack of familiarity with therapy can be a roadblock for those looking for mental health support. Se-hee guides her audience through her personal therapy sessions as she unpacks challenges she faces in her life. Her book is an intimate, accessible portrayal of one person’s relationship with therapy, providing one example for those curious about how it works. I hope others looking for books on mental health can find the same comfort I did in reading Tteokbokki. – Yna Aggabao

Read the review | Get the book

For our younger readers

Avicenna, The Father of Modern Medicine by Nazila Fathi. This book recounts how Avicenna, a doctor in mid-11th century Uzbekistan and Iran, changed our world by showing how we should make other people’s lives better through medical care. His book The Canon of Medicine was the most important medical book for hundreds of years. He also came up with a common Iranian expression, “Silence is the best reply to a fool.” The book tells us about his life, too, how he had enemies who chased him from place to place. One of my favorite parts is a story about how he treated a boy who thought he was a cow. There’s a quiz at the end to help you remember what you read. This is a good book for 8-to 12-year-olds. – Clara Rura

Here are some of the 2022 major award winners for health and science journalism. These are reads we think will inspire you and change the way you think about public health.

“The Pain Was Unbearable. So Why Did Doctors Turn Her Away?” By Maia Szalavitz for Wired, August 2021. Winner, Long-form science journalism, National Association of Science Writers.

One of the U.S.’s pre-eminent writers on the overdose crisis, Maia Szalavitz investigates a murky algorithm that flags patients as “drug-seekers.” Szalavitz discovers an extensive network of state-run databases tracking patients prescribed controlled substances and rating their risk of misusing their prescriptions. Szalavitz is at her best in this piece, weaving the hydra-headed pieces of the U.S. war on drugs, today’s overdose crisis, technology, and medicine into a feature that will change the way you think about pain and health.

“Pig to human heart transplants are the future. Are we ready for it?” By Simar Bajaj for the Guardian, August 2022. Winner, Best science story, Foreign Press Association.

Simar Bajaj’s story for the Guardian is a gripping peek into the operating room, where scientific breakthroughs meet real people. Bajaj brings us deep inside the budding field of xenotransplantation, the transfer of cells, tissues, and organs between species. In January 2022, David Bennett made global news when he became the first person to receive an organ from an animal, a pig’s heart. He lived for three months before dying in March. Bajaj starts with Bennett to explore the history and future of this uncertain research field.

As Covid-19 took over the world, other diseases dropped out of the news cycle. But they didn’t go away. In 2016, there was an outbreak of microcephaly in babies born to mothers with Zika. Those children still live with microcephaly—a condition in which a baby’s head is smaller than expected leading the developmental delays, seizures, and other health problems. In Mariana Lenharo’s extensively reported piece, the children’s parents say they have been forgotten by the world, and especially by the researchers whose work they desperately need to better understand their children’s condition.

A collaboration between ProPublica’s Local Reporting Network project and the Palm Beach Post, the investigation exposed how Florida regulators allow the sugar industry to pollute freely. The reporting team found the state was using a faulty air monitor that failed to enforce federal clean-air standards. As a result, the county upgraded its air-monitoring equipment. This ambitious series includes interactive mapping and other multimedia elements, making this a series worth taking a few hours to explore.

This three-part series investigates why so many fatal police shootings in New Hampshire involve someone with a mental illness. The series focuses on the death of one man, David Donovan, who was shot while having a mental health crisis in November 2020. A stellar example of why local, investigative reporting is indispensable.

Looking for a public health podcast that will make you chuckle? Check out This Podcast Will Kill You. Cohosted by the “Erins,” Erin Welsh and Erin Allmann Updyke, both epidemiologists and ecologists, is an often hilarious and always entertaining listen on all things infectious disease, from dengue to sepsis. Didn’t think learning about sepsis could be fun? The Erins will make you think twice.

Clara Rura is a first grade student in Cambridge, Massachusetts.