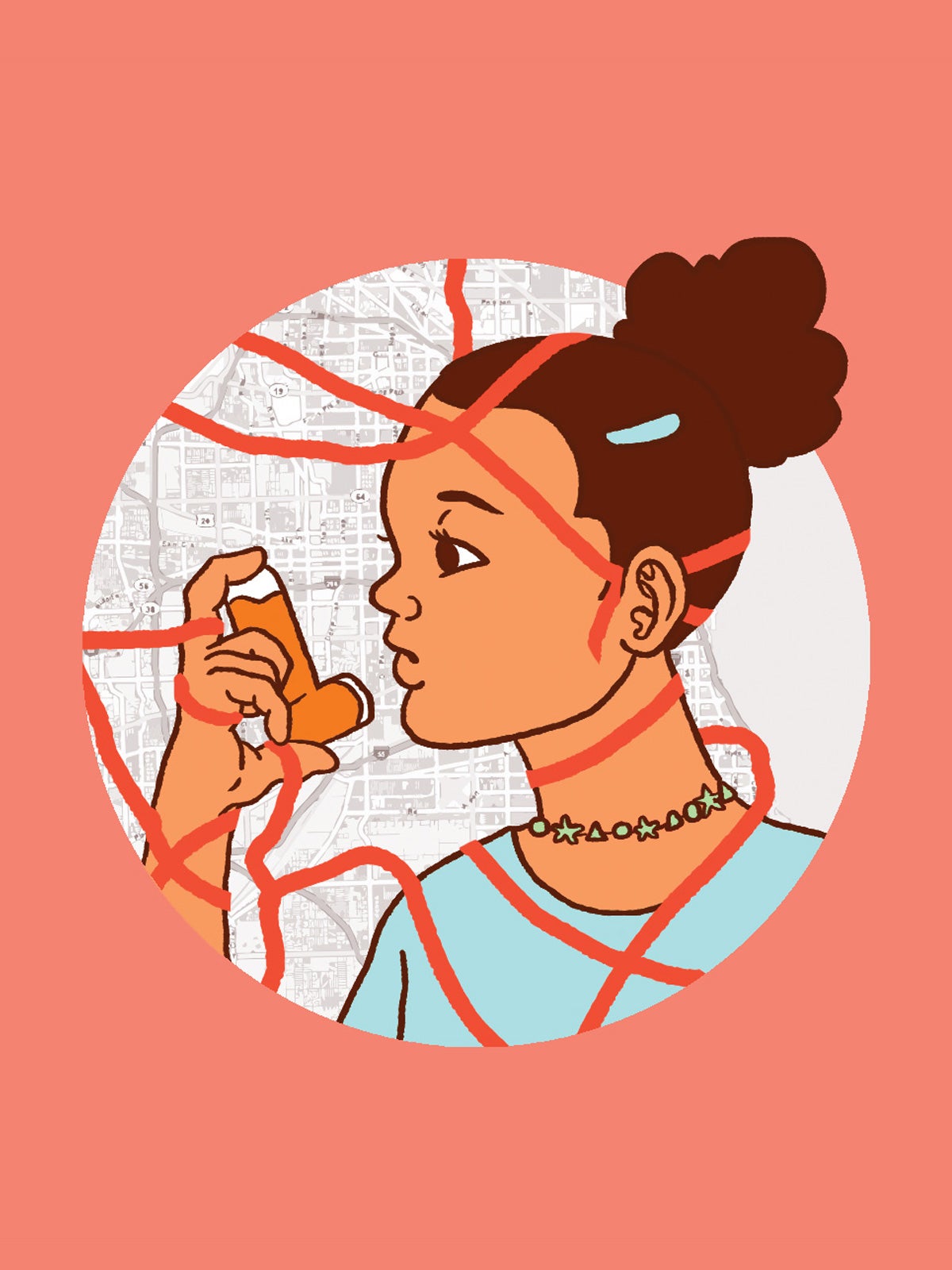 Racism’s impact on health outcomes is a relatively recent focus of public health research. Using the word “racism” itself is still challenging for some public health scholars, despite recent data clearly showing poorer health outcomes for Black people in the United States as a group compared to white people. A growing body of research is pinpointing how structural racism—the ongoing impact of discriminatory practices—affects the health of people of color, especially Black people, from infancy to old age.

That racism has pervasive, pernicious effects in the present day should not surprise us, says Glenn Ellis, a medical ethicist, writer, and equity consultant. “Let’s say you build a house and all the wood you use is infested with termites. The structure of the house has a fundamental flaw in it.”

One of the biggest “termites” in public health outcomes could very well be redlining, a term derived from color-coded maps and training used by the federal government from the 1930s until 1968 to guide discriminatory home lending policies. Such policies also shaped, and continue to influence, policy and public investment decisions nationwide. Scholars have methodically shown the long-tail effects of these practices across all stages of life.

The impact of structural racism can be seen even before birth. Multiple researchers have found an association between formerly redlined communities and the risk that an expectant mother will deliver prematurely. Babies in these communities, still predominantly Black, are more likely to have low birth weights and medical complications. Premature births can lead to intellectual, developmental, behavioral, and sensory disabilities. Such early developmental issues can set the stage for lifelong health, social, educational, and income disparities, researchers say. Infant death rates are higher in these areas. So are maternal mortality rates.

More From the Fall Issue

Lead poisoning is a crisis for Syracuse’s Black families

One recent paper highlights the ongoing impact that babies face from redlining, even decades after its demise in 1968. Researchers based at the University of Rochester analyzed some 199,000 records of live births from 2005 to 2018 in New York’s Finger Lakes region. Their study, published in 2021 in JAMA Network Open, showed preterm birth rates increased in line with the grades assigned to neighborhoods in the redlining era. In neighborhoods previously graded A, only 7.5 percent of live births were preterm. In D neighborhoods, the lowest rating, 12.38 percent of live births were preterm. That’s more than a 50 percent difference.

The long-term complications from structural racism often manifest in the physical environment and have become a leading cause of health disparities and death. This is described as environmental racism—such as exposure to polluted air, water, soil, housing, and school buildings—and drives many childhood health complications, notably asthma and lead poisoning. Black, Latino and Native American children disproportionately experience these conditions.

Asthma has been described as “the most racially and ethnically disparate health condition in the USA,” where it affects more than 4 million children and 21 million adults. Black Americans are 40 percent more likely to experience asthma than white Americans, according to 2018 CDC data.

Black children also experience higher rates of asthma-related disparities and fatalities exacerbated by lower access to health care. A study of emergency room visits in some of California’s largest cities, published in The Lancet Planetary Health in 2020, found that asthma-related, age-adjusted emergency room visits in previously redlined zip codes were two to four times higher than in other communities.

Lead poisoning is another example. Decades of research have established how lead poisoning can damage developing brain cells in children, leading to intellectual, developmental, and behavioral disabilities. There are no safe levels of lead. Even trace amounts can be highly toxic to very young children if they accumulate in the bloodstream.

Research shows lead poisoning presents a particular risk to low-income Black communities, because of aging housing stock and the presence of lead in water pipes, paint, construction materials, and soil. Black children aged one to five living below the federal poverty line are four times as likely to have elevated blood lead levels than poor white and Hispanic children, according to research published in 2020. Exposure levels rise to six times as likely among poor Black toddler-age children living in housing built between 1950 and 1977.

Stress as a health risk began receiving emphasis in the 1950s, when it was reported as a factor in cardiovascular health problems for successful middle-aged white men.

Only more recently have researchers discovered the associations between stress and race that often develop during teenage and young adult years. Chronic exposure to stressful situations that are a result of structural racism—such as trauma, poverty, racial discrimination, or exposure to violence—create progressive “wear and tear” on the human body that makes Black Americans more likely to experience cardiovascular disease, depression, diabetes, hypertension, and many other complications. This is particularly true for girls and women of color.

“Toxic stress” is one example of this wear and tear. The human body responds to perceived threats with a physiological stress response, popularly called the fight or flight instinct. To address the threat, the brain floods the body with stress-related hormones, such as cortisol, to adjust adrenaline, breathing, and metabolism. Cortisol allows the body to operate more efficiently—needing less sleep, for example—when confronting an acute stressor like staying up overnight to finish a paper.

Researchers believe that experiencing chronic levels of stress—such as racism or bullying—creates toxic levels of cortisol. This happens because appetite, attention, cognition, memory, sleep, and other systems are continually on alert and not allowed to rest and repair. There are cortisol receptors in almost every cell. The excessive cortisol levels can gradually cause problems throughout the brain and body. This is one way that racism gets under the skin and affects health.

Premature biological aging is another example. Auburn University researchers found that Black Americans who reported more incidents of racial discrimination over a 10-year period showed distinct signs of faster aging at the cellular level than whites. The data showed that more racial discrimination incidents were associated with the shortening of telomeres, the protein caps at the end of DNA sequences. Telomere shortening leads to cellular disease and death. They typically occur as a function of aging and factor into conditions such as cardiovascular disease, high blood pressure, obesity, stroke, and dementia.

The increased likelihood that Black Americans will face cardiovascular disease, hypertension, some cancers, and other illnesses at younger ages than white people has been described as “weathering.” Many of these conditions are not diagnosed until later years when the conditions are more advanced, thus more difficult to treat.

Late-stage diagnosis is another long-term effect from structural racism in the U.S. health care system. Many African Americans will face discrimination and stigmas when trying to access health care. African Americans, on average, experience lower quality care and less access to state-of-the-art treatment and technologies, such as more sophisticated medical imaging. African Americans have the highest mortality rates for most cancers. Black women, for example, are 40 percent more likely to die from breast cancer than white women.

Formerly redlined communities have higher risks of late-stage cancer diagnoses and mortality rates compared to white neighborhoods. The disparities persist in some cases despite gentrification and economic privilege.

Researchers at the Harvard T.H. Chan School of Public Health and the Massachusetts Institute of Technology analyzed redlining maps for 28 municipalities around the greater Boston area. The researchers found residents in formerly redlined communities were at “an elevated risk for late-stage” diagnosis of breast, cervical, colorectal, and lung cancers despite some communities’ “present-day economic and racial privilege.” The most striking disparities in these formerly redlined communities were for lung cancer diagnoses, where almost 75 percent were late-stage.

A significant body of research has found that Black people over 50 experience poorer health outcomes at almost every metric—from earlier mortality rates to higher rates of cancers to earlier onset of chronic conditions. Older Black Americans are more than twice as likely as white Americans to experience Alzheimer’s or another dementia, but are 35 percent less likely to be diagnosed, making them less likely to benefit from medications, treatment, and care.

Public health scholars generally agree that a lifetime of racism—interpersonal, institutional, and structural—contributes to these cognitive outcomes. But the mechanisms underlying the outcomes are not well understood. Structural racism is difficult to quantify. Reviewers writing in the February 2022 Journal of Urban Health found “no widely tested and validated tools that comprehensively measure structural racism, making its study more difficult than the study of interpersonal racism.”

The review, conducted by researchers at Johns Hopkins University, looked at 43 studies and found that birth and residence in a “Jim Crow state” were the main proxies for structural racism. Lead author Sarah E. LaFave and co-authors concluded that their review “revealed an urgent need for the examination of the impact of structural racism in particular on older adult health.” In addition, it is not well understood why Alzheimer’s—a gradual degradation in brain cells and the connections between cells—targets some people and not others regardless of racial designations.

One new study aiming to measure the impact of structural racism on cognitive decline is being run in partnership by researchers at the University of Pittsburgh and the public policy think tank RAND Corporation. They’ll study the residents of two largely Black neighborhoods in Pittsburgh over a five-year period to analyze how structural racism affects people at the neighborhood and individual levels and whether it contributes to dementia.

Rod McCullom is a science journalist in Chicago.

Noah Lawrence-Holder is a Black, nonbinary artist based in the Twin Cities.