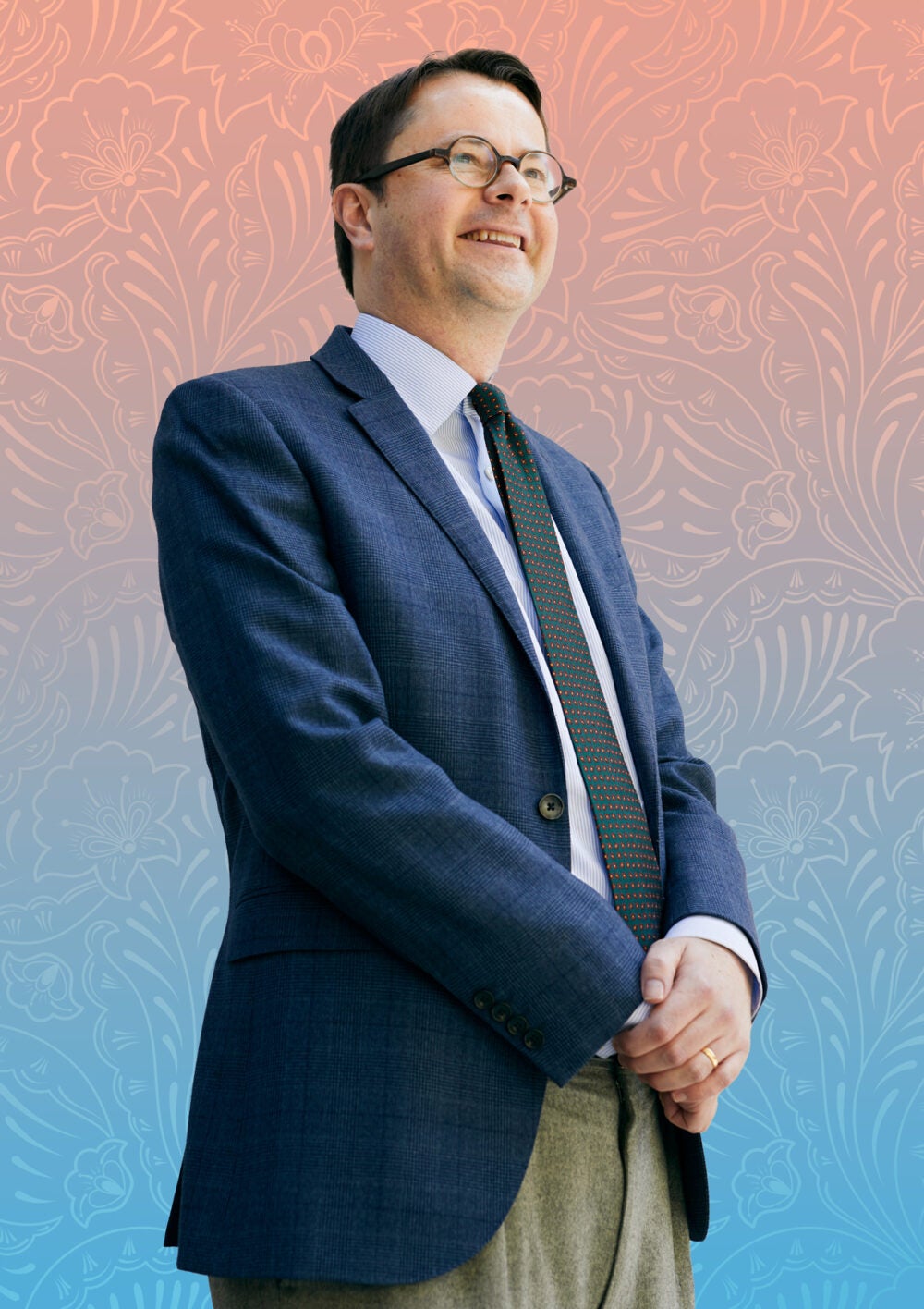 In spring 2021, the mood of the moment was “languishing.” The shock of the early pandemic was subsiding, but life was still far from feeling good. In a popular New York Times article and the deluge of comments that followed, people reported prolonged feelings of stagnation and emptiness. Our collective emotional batteries were drained.

This was no surprise to Harvard T.H. Chan School of Public Health’s Tyler VanderWeele, who’d been tracking the changing moods of Americans over the course of the pandemic. In a follow-up article to the Times piece, he offered pointers for those looking for ways to improve their wellbeing during difficult times. There’s a science behind the habits and practices that fortify us emotionally and seem to ultimately improve physical health, he says. Things like practicing gratitude and helping others can be stepping stones toward a life where we’re no longer languishing but flourishing.

Since launching Harvard’s Human Flourishing Program in 2016, VanderWeele has been building a body of evidence to help understand the state of being “in which all aspects of a person’s life are good.” With the help of a team of statisticians, psychologists, philosophers, physicians, and theologians, he’s distilled a set of universal desires like strong relationships and a sense of purpose, and is empirically digging into the benefits of such seemingly abstract concepts as virtue, forgiveness, and love.

“We study physical health and income very well, and these things are important, but people also care about something more,” VanderWeele says. “Why do we know so much more about the determinants of cardiovascular disease than the determinants of a happy, purposeful life?”

It’s a tailor-made research focus for VanderWeele, John L. Loeb and Frances Lehman Loeb Professor of Epidemiology. After he earned bachelor’s degrees in mathematics and in philosophy and theology at Oxford, he yearned to put his quantitative skills to a real-world purpose. He then studied finance at the University of Pennsylvania. It wasn’t a good fit; however, while he was earning his degree he met the chair of the biostatistics department at church. Their discussions about the field—which untangles data to answer research questions related to living organisms—inspired VanderWeele to change his professional course. He earned a PhD at the Harvard Chan School in 2006 and three years later joined the faculty. A tip from Eric Rimm, professor of epidemiology and nutrition, pointed him to an overlooked question on religious service attendance in the long-running Nurses’ Health Study, a collaboration between the School, Harvard Medical School, and Brigham and Women’s Hospital. VanderWeele subsequently found that regular participation in a religious community over a 15-year study period was associated with about a 30 percent decrease in all-cause mortality, a 30 percent decrease in the incidence of depression, and a five-fold decrease in suicide. The results floored him and made him wonder, “What other important factors in population health are we ignoring?”

As he’s built up the Human Flourishing Program, adequate data has proved the biggest hurdle. Most relevant studies are cross-sectional—they offer a snapshot in time—limiting their public health implications. VanderWeele has been getting around this by piggybacking his flourishing assessment onto the Nurses’ Health Study and other longitudinal cohort studies. This has required paring it down to a list of 12 questions that can be added to existing studies, two for each of these essential categories: happiness and life satisfaction, physical and mental health, meaning and purpose, character and virtue, and close social relationships, plus supplemental questions on financial security. People rate their lives on a scale from zero to 10, with 10 being the most positive.

Prior to the pandemic, the U.S. national average in online flourishing surveys was about a seven, VanderWeele says. Over the pandemic’s first year, scores dropped to 6.5. This was expected, but there were some surprises deeper in the data. While happiness and life satisfaction declined substantially, the drop in meaning and purpose was noticeably smaller. Social connectedness also fell less than expected, suggesting to VanderWeele that people have been ispending more time with those they live with, or reaching out over Zoom.

A new effort VanderWeele launched earlier this year has the potential to propel his field a giant step forward. The $43.4 million Global Flourishing Study will follow roughly 240,000 participants from 22 countries over five years. Developed as a collaboration with Baylor University, Gallup, and the Center for Open Science, and funded by a consortium of foundations, it is the first study to take a global, longitudinal approach to understanding who is flourishing and why or why not. It will go beyond VanderWeele’s basic assessment to look at an array of factors, including traits like extroversion and optimism, spiritual practices, and having a political voice.

He hopes to gain insight into which areas of wellbeing and its determinants are universal, and where culturally specific differences lie. And seeing varying results across the globe may point the way to lessons we can learn from each other, he says.

As VanderWeele sees it, a greater engagement with flourishing by public health practitioners could help improve community ties in the U.S. that were already fraying before the pandemic and have since gotten worse. The last two years have left him with many vexing questions and avenues for future inquiry. For example, is it possible to foster the sense of a common good?

In his ongoing work on religious communities, VanderWeele has tried to tease out what aspects of participating in services seem to be the most beneficial to participants. The secret sauce, beyond the social engagement itself, appears to be what he calls “purpose-focused content”—in other words, common values and a sense of participating in something bigger than oneself. That may be what makes it more beneficial for health and wellbeing than a weekly card game with friends, he says, adding that a weekly volunteer commitment may be the closest we have to a comparable secular experience.

While VanderWeele explores practices that foster community ties, his colleagues in the Human Flourishing Program are looking at policy translation. The group aims to bring together scholars, practitioners, politicians, and local leaders in the coming years to reflect on ways to tackle loneliness and foster belonging and connectedness.

“We should broaden the lens of public health and start asking how we can enhance human relationships and facilitate greater levels of happiness and meaning, while respecting the diversity of cultures and traditions,” VanderWeele says. “These are not easy questions but they could make an enormous difference to health and wellbeing in our country.”

Awards, honors, and other recognitions for a wide range of faculty