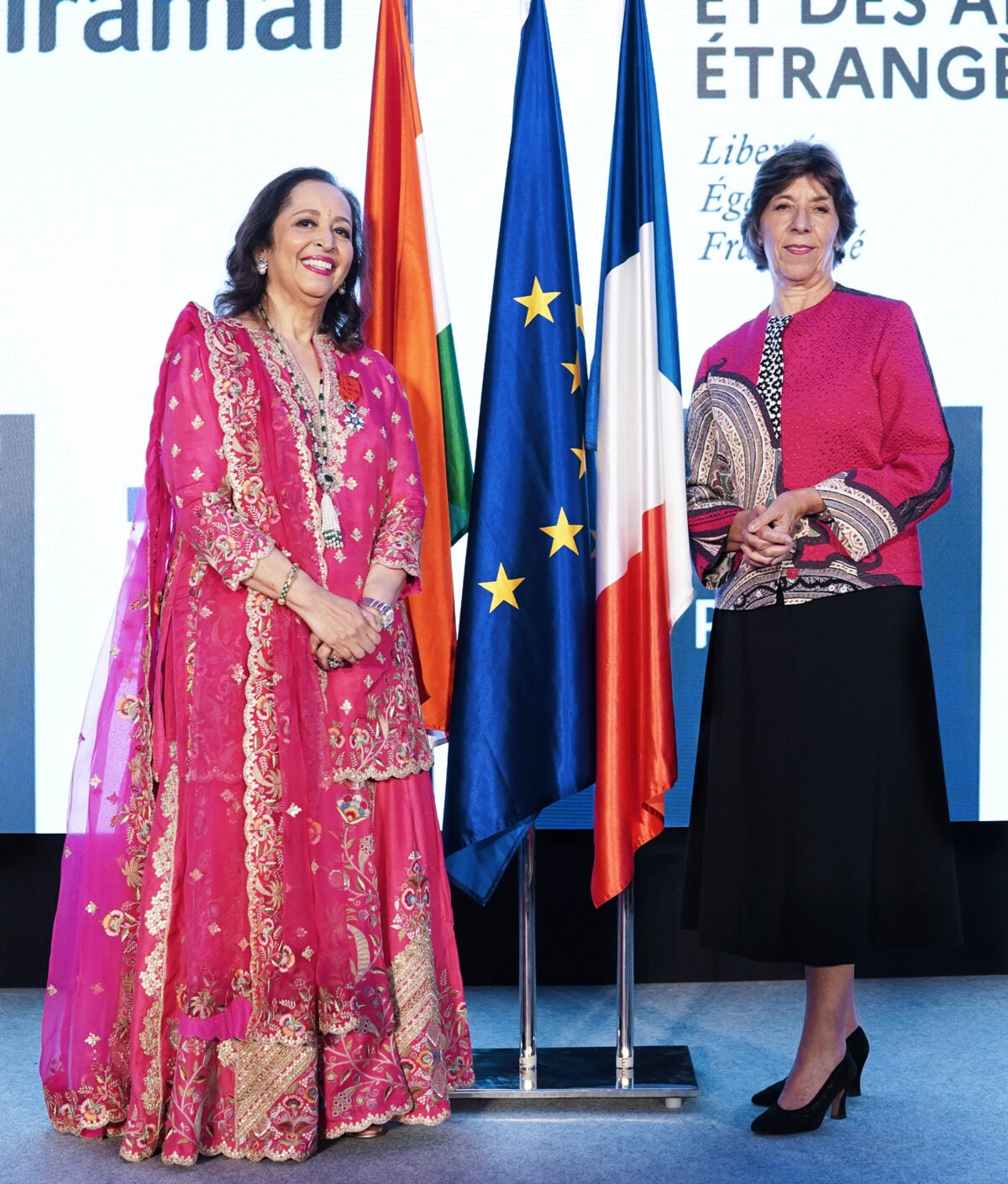 Swati Piramal, a leading Indian scientist and industrialist, received the Chevalier de la Légion d’honneur (Knight of the Legion of Honor), France’s highest civilian honor, on September 15. Catherine Colonna, minister for Europe and foreign affairs of France, conferred the award at a ceremony in Mumbai.

Piramal, vice chairperson of the Piramal Group, was recognized for her contributions in a variety of fields—including business and industry, science, medicine, art, and culture—and for her role in strengthening ties between India and France. Piramal Group is a global business conglomerate with interests in pharmaceuticals, finance, and real estate. Its philanthropic arm, Piramal Foundation, focuses on sustainable development programs in India in the areas of water, education, and public health.

In her remarks at the award ceremony, Colonna praised Piramal as a “businesswoman who gives back to society,” and noted her national and international influence in public policy, health care governance, and women’s leadership.

Speaking at the event, Piramal said that she was humbled by the recognition, and that she and her colleagues would continue their work to strengthen bilateral relations between India and France. She added that the award also is an acknowledgement of work by her colleagues at Piramal Group, both in India and internationally.

After earning her medical degree from Mumbai University, Piramal earned an MPH in international health at Harvard T.H. Chan School of Public Health, where she was the student commencement speaker and served on a task force on chronic health issues in developing countries. Years later, she and her husband Ajay Piramal gave a gift to the School to launch the Harvard T.H. Chan School of Public Health India Research Center. It opened in 2015 in Mumbai, and facilitates the work of members of the School community and their collaborators in India.

Through the Piramal Group—which states that its core values are “Knowledge, action, care, and impact”—she has led initiatives to increase access to health care and clean water in India.

As the director of Piramal Foundation, Piramal is involved in developing long-term and scalable solutions that aim to provide further impetus to India’s economic and social progress. She leads the Foundation’s efforts towards effective public policy and governance in public health, water, and education through private-public-partnership models. According to the Foundation, its work—which aims to solve India’s most intractable challenges—has “touched 113 million lives.”

Throughout her career, Piramal has been a strong advocate for public policy change in India. She was the first woman elected president of the Apex Chamber of Commerce in its 90-year history. She has served as a member of the Prime Minister’s Trade Advisory Council and Scientific Advisory Council.  For these and many other efforts, Piramal was awarded one of India’s highest civilian honors, the Padma Shri, in 2012.

Piramal received a Harvard T.H. Chan School of Public Health Alumni Award of Merit in 2012. She is a member of Harvard Chan’s Board of Dean’s Advisors, Harvard University’s Global Advisory Council, and a previous member of its Board of Overseers.

Career updates from past classes, starting with a note from the class of 1995.
Alumni news

Career updates from past classes, starting with a note from the class of 1990.
Alumni news

Career updates from past classes, starting with a note from the class of 1990.