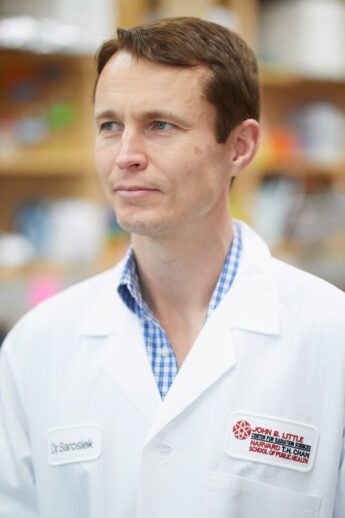 For stressed-out cells, death is often the best option. Consider that every day a healthy adult will lose somewhere in the range of 60 billion cells to apoptosis, the process by which a cell self-destructs, usually for the greater good of the body. Maybe the cell was loaded with misfolded proteins or maybe it was just old; either way, it needed to perish. But some cells don’t accept this grim fate and push on well past their prime. Conversely, some cells may die prematurely, initiating the process of cell death before they are instructed to. The fallout from these unruly actors can be disastrous and cause a range of illnesses, including cancer, inflammation, autoimmune disorders, and neurodegeneration.

For years, Kristopher Sarosiek has focused on figuring out what determines whether a cell will live or die and how the process can be modified. Sarosiek is an assistant professor of radiation biology whose work straddles the Department of Environmental Health, the John B. Little Center for Radiation Sciences, and the Molecular and Integrative Physiological Sciences Program. Much of his research has been aimed at leveraging apoptosis to reduce the harm of toxic radiation therapies and chemotherapies, especially among pediatric cancer patients, and uncovering new treatment approaches for Alzheimer’s disease and brain injuries. But as COVID-19 turned into a global public health crisis, Sarosiek and his lab members diverted some of their attention to the pandemic.

“We decided to start looking into why there are different severities of COVID-19 and how the virus actually affects lung cells to cause severe respiratory disease,” Sarosiek says. “In particular, we were interested in the incredible difference in disease severity between children and adults and the elderly.”

He, along with postdoctoral fellow Zintis Inde and other members of his laboratory, homed in on a receptor on the outer membrane of cells, angiotensin converting enzyme 2 (ACE2). ACE2 is involved with regulating blood pressure but also is the point of entry for SARS-CoV-2’s infamous spike protein. In a study published in Science Advances last year, Sarosiek’s team reported that ACE2 expression in lung cells increases significantly with advancing age. In other words, the lungs of the elderly offer up many more targets for the virus to latch onto compared with young lungs, which could help explain the sharp disparities in disease severity by age.

What excited Sarosiek most, though, was his team’s discovery that apoptosis is a critical natural defense mechanism against COVID-19. As he explained it, the virus hijacks an infected cell’s protein-production machinery to churn out more of the virus. “In most cases, the cell realizes that something is wrong and it self-destructs via apoptosis,” Sarosiek says. “However, if the cell is unable to kill itself by the apoptosis program, which is a controlled form of cell death that typically doesn’t produce inflammatory responses, it will keep producing virus proteins until it bursts open and spills the virus particles into surrounding tissue where they can infect more cells.”

In the Science Advances study, Sarosiek and colleagues found that lung cells from young people are better equipped to trigger apoptosis when compared with lung cells from adults. Not only does this finding potentially explain the age-related differences in disease severity, but it also offers up a potential treatment option. Sarosiek is now working on studies to see if drugs that induce apoptosis in targeted cells can slow the progression of COVID-19. The hope is that if these drugs can trigger infected cells to die sooner and via the noninflammatory process of apoptosis, nearby immune cells called macrophages can swoop in, swallow them up, and get rid of them and their infectious contents—sort of like a hazardous waste disposal program for the body. The fewer cells that are literally bursting with SARS-CoV-2, the harder it will be for the disease to ravage an individual’s airways.

While vaccines have been effective at stemming the spread of the virus, COVID-19 cases have continued to pile up, making it painfully clear that the world needs treatments for the disease in addition to preventive measures. “It’s been frustrating to see how few therapeutics have proven to be effective against this virus,” Sarosiek says.

To build on these initial findings, Sarosiek and his team have identified apoptosis-modulating compounds they believe could work against SARS-CoV-2. They are working with collaborators to test them in animal models, and the findings could have significant implications for how COVID-19 is treated. But Sarosiek also hopes this work can ultimately uncover new treatments or preventive strategies across a wider variety of diseases.

“Millions of people are dying from COVID, and so I do feel like there has been a strong sense of urgency to this research,” Sarosiek says. “At the same time, there is a dire need to develop and improve therapies for Alzheimer’s patients and for children with brain tumors who are being treated with radiation therapy today and will suffer side effects from the treatment for the rest of their lives. There’s urgency throughout all of science.”

Chris Sweeney is a writer and editor living in Boston who has spent his career ping ponging between magazine journalism and public health. He currently works at the Harvard T.H. Chan School of Public Health.

A lot fell through the cracks during the COVID-19 pandemic, but one doctor argues we have a clear way forward.
Ideas

Only 5% of adults eligible for the new COVID booster have received it. Local health departments can change that.
People

Making the switch from stability to startup