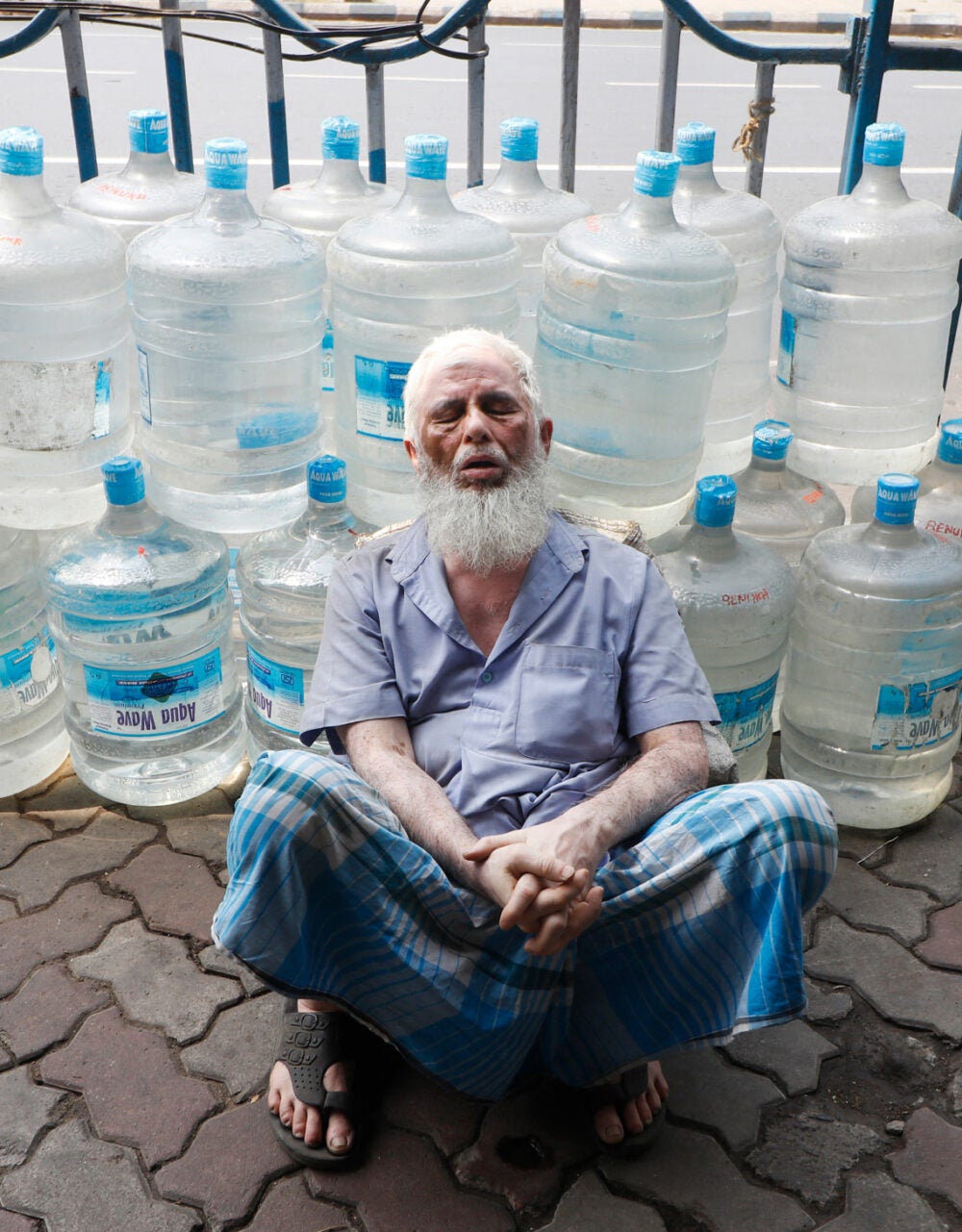 I know heat. I grew up outside New Delhi, which lies in the hottest region of India. My siblings and I were kept indoors for much of the summer; I still remember my mother’s warning mantra: “Loo lag jayegi”—you will get sunstroke from the loo. The loo, strong, scorching winds that literally zap you, can cause heatstroke and even death.

I live outside Boston now and try to avoid going back to Delhi during the summer months. But I had to visit in the summer of 2019, a year when temperatures hit a record 118.4 degrees Fahrenheit. I felt the heat directly—I broke out in a heat rash soon after arriving. When I’d lived there 30 years earlier, I could go about my reporting job without an air-conditioned car. Most homes did not have air conditioners and were kept cool during the day with khus, shades made from reed grass. At night, temperatures dropped considerably, and we slept on our rooftops. That would be unthinkable now. Middle-class people move from air-conditioned cars to air-conditioned offices and homes. Members of my family have told me they can no longer go for evening walks in summer, because the ground heat blisters their feet through their shoes.

A fellowship to help fight fatigue – and climate change

The Climate Health Organizing Fellowship is training a dozen teams on activating their communities to improve patient well-being.

I don’t know this heat. But I know it’s brought on primarily by the effects of greenhouse gas emissions, and India will see much more of it. India is, of course, a mostly warm country. In many areas, temperatures already hover above 100 degrees during the peak summer months of April to June. The high temperatures are projected by century’s end to be as much as 40 degrees Fahrenheit above the mean established in the 30 years from 1976 to 2005, according to a recent assessment of climate change by India’s Ministry of Earth Sciences. India is far from the only place feeling the burn. Every continent has seen increases in mortality due to heat waves driven by climate change, according to a study in Nature Climate Change in May 2021. The pledges made at COP26 in November won’t stop the effects of climate change from getting worse. The question is, will it get so bad that humans can’t adapt? We know that proteins in the body start to disintegrate at higher temperatures. And Noah Scovronick, an assistant professor of environmental health at Emory University Rollins School of Public Health in Atlanta, tells me people in cold-climate areas will suffer more during heat waves.

But our bodies also acclimatize with enhanced sweat rate, improved blood flow, and lowered body temperatures. “We see this in athletes and how our bodies adapt to the time of the year,” explains JohnEric Smith, a professor in kinesiology at Mississippi State University.

India will be a lamp into the future, since heat waves here are projected to double in duration and become three to four times more frequent. Chirag Dhara, a climatologist at the Indian Institute of Tropical Meteorology and a co-author of India’s climate change assessment report, says, “When the human body is [already] stressed, even a marginal increase can have a huge impact.” In other words, a slight rise here will feel like a quantum jump in a place with lower baseline temperatures.

The poor and those who work outdoors will be especially affected. In India, women construction workers routinely have young children by their side, potentially exposing them to extreme heat. And in the slums of Indian cities, houses often have roofs and sometimes even walls made of tin, creating furnace-like conditions. Research by Vidhee Kiran Avashia, a professor at the Adani Institute of Infrastructure Management, found living in such homes raised the risk of heat-related death for women over 60.

Heat-related deaths are already common across India: 800 deaths in Ahmedabad in 2010; 2,500 scattered across northern India in 2015; 142 in Bihar in 2019. These are just the official deaths, the ones medically certified as caused by direct exposure to the sun. That’s barely 10 percent of the total, says Dileep Mavlankar, the director of the Indian Institute of Public Health. A study in The Lancet Planetary Health pegged deaths in India from climate-change-related temperature shifts, hot and cold, at nearly 740,000 annually.

And the mortality data don’t begin to account for disease and suffering caused by heat. Periods of extreme heat create risks for people with heart disease, high blood pressure, respiratory disease, or diabetes. And heat exposure creates concerns for pregnant women and rises in preterm births. Yet many of these statistics are not regularly reported. The true extent of the health crisis caused by climate change is masked by how we measure it.

As with all health issues, it matters where we live, and how. India is still a developing country and rapidly urbanizing, with five metropolitan areas above or near 10 million people. These densely packed cities have become urban heat islands. The highway connecting my city to Delhi once ran through a lush green area. Now, it is lined with tall housing complexes. Temperatures in a heat island can be 20 degrees Fahrenheit higher than in neighboring areas with a green canopy. In a few decades, living in these heat islands “will be far deadlier for people” than living in a place with occasional extreme heat spikes, says Scott Sheridan, a climate scientist at Kent State University in Ohio.

One crucial survival factor looks likely to be access to air conditioning. While people in Texas, Arizona, or the southeastern U.S. have adapted to a certain level of heat, most homes and businesses in these areas also have air conditioning. That’s not true in the Pacific Northwest, where hundreds of people died in 2021’s June–July heat wave. “You could be 20 feet from me and the outcome could be different, because you have an air conditioner in every room,” says Sheridan. Similarly, studies showing the Persian Gulf region might be too hot for human survival by 2090 don’t take into account most homes in the region are air conditioned, he says.

However, having an air conditioner isn’t enough in a developing country. India’s electric grid often can’t handle the peak summer load that comes when people turn on their air conditioners. The true “haves” are those with means to buy diesel generators to counter frequent power disruptions. Meanwhile, both air conditioners and especially generators exacerbate air pollution, leading to more heat. These two stressors acting in tandem will have serious public health consequences, warns Yangyang Xu, an assistant professor at Texas A&M University who has studied their potential health impacts across South Asia.

McKinsey & Company, a management consulting firm, has estimated the effects of rising temperatures could reduce GDP in India, Bangladesh, and Pakistan, countries whose economies rely on outdoor labor, 8 to 13 percent by 2050. But other experts caution against overly dire forecasts. The mercury is rising but slowly, says Krishna AchutaRao, director of the Centre for Atmospheric Sciences at the Indian Institute of Technology.

It’s also true that small steps can help beat the heat. After hundreds died during Ahmedabad’s 2010 heat wave, a remediation plan centered on low-cost, local action was created by a coalition including the Indian Institute of Public Health and the American nonprofit Natural Resources Defense Council. Part of the plan involved coating roofs with heat-reflecting paint. The India Meteorological Department began issuing heat wave warnings in 2016 and educating the public on heat exposure. Drinking water was supplied to outdoor workers. The result has been a sharp drop in heat-related deaths, from 800 in 2010 to 25 in 2019. Similar heat action plans have been instituted in 23 Indian states. In some cities, both the federal and state governments are urging employers to reduce or change work hours for outdoor labor during the summer. In hot and humid Chennai, AchutaRao notes, the workday for many people starts around 4 a.m.

Other countries are also responding. The Biden Administration in September 2021 launched a series of initiatives, led by the Occupational Safety and Health Administration (OSHA), to make workers safer when it’s very hot. OSHA is developing a workplace heat standard and enforcing heat-related inspections. In France, Paris now has mist showers, air-conditioned spaces, and extended summer hours for swimming pools and parks.

Closer to my current home outside Boston, local government and nongovernmental organizations have become engaged in efforts to fight hot weather in low-income communities such as Chelsea, Everett, and Revere by creating cooling centers where people can get water and find shade. In Chelsea, a pilot project is underway to coat roofs with reflective paint, and misting stations have been set up. Discussions about adding green spaces are also taking place.

Globally, some cities are baking heat into their political infrastructure. In April 2021, Miami became the first city to appoint a chief heat officer, as have Athens, Greece, and Freetown, Sierra Leone. These policymakers are meant to help residents deal with extreme heat, particularly those most vulnerable.

And while I am doubtful about my native country’s ability to truly help its most vulnerable, in July 2021, more than 100 million saplings were planted throughout the northern Indian state of Uttar Pradesh. It won’t solve the crisis, I know, but it might mean people can safely go for an evening walk.

Kalpana Jain, a one-time health editor at The Times of India, is a writer in Cambridge, Massachusetts, and senior ethics and religion editor at The Conversation.